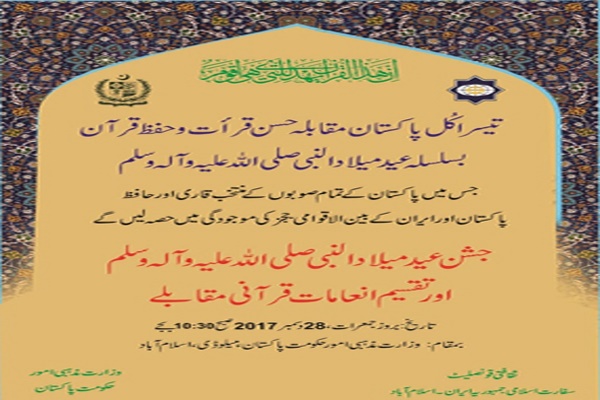 According to the website of the Islamic Culture and Relations Organization (ICRO), Pakistan’s Ministry of Religious Affairs and the country’s Sawt al-Quran al-Alamiya Institute will cooperate in organizing the event.

The final round of the Quran contest, to be attended by Qaris and Quran reciters from across Pakistan, is slated for Wednesday, December 27.

The Ministry of Religious Affairs in Islamabad will host the Quranic event.

A number of Pakistani Quran experts as well as Iranian Quranic figure Mahmoud Kashefi will form the panel of judges.

The preliminary stage of the contest was held in the past few months in different provinces of Pakistan and winners of the first and second ranks in recitation and memorization of the Quran made it to the final round.

The awarding ceremony will be held on Thursday with the participation of Pakistan’s Minister of Religious Affairs and Iran’s ambassador to Pakistan.

Top winners of the two categories will represent Pakistan in the Islamic Republic of Iran’s International Quran Competition next year.