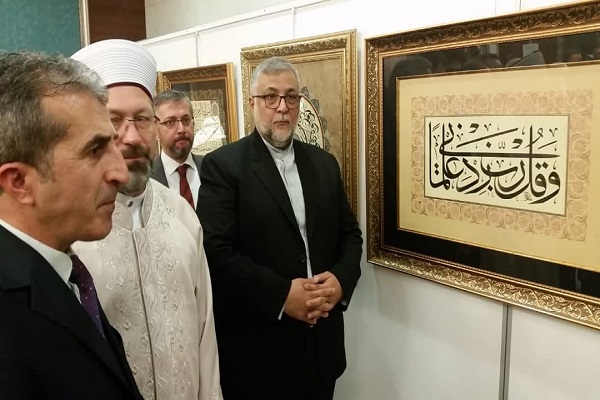 According to the Islamic Culture and Relations Organization (ICRO), the opening ceremony of the exhibition was attended by ICRO Chief Abuzar Ebrahimi Torkaman and head of Diyanet Ali Erbas.

Different interpretations of Quran including Tasnim Exegesis, Al-Haddad Exegesis in Arabic, Al-Kitab Al-Aziz Al-Kunouz, Al-Jami’, Jawahir Al-Samim, Ahsan-ol-Hadith, Kawthar, Al-Mizan and interpretations adopted from Imam Khomeini’s (RA) works in 5 volumes as well as Quranic calligraphy works, Quran manuscripts and illuminations are among the works on display at the exhibition.

A number of Iranian and Turkish artists are also present at the Quranic exhibition, which will run for one week.

Addressing the opening ceremony of the expo, Ebrahimi Torkaman said that purity of soul and body are necessary for a Muslim artist who wishes to create a Quranic and Islamic artwork.

The exhibition has been held on the sidelines of the first round of dialogue between religious scholars and experts from Iran and Turkey in Ankara.