General
News ID: 3472066
TEHRAN (IQNA) – The Zionist regime of Israel ordered the demolition of several more Palestinian facilities, including a number of homes, in the occupied West Bank, the Palestinian media says. 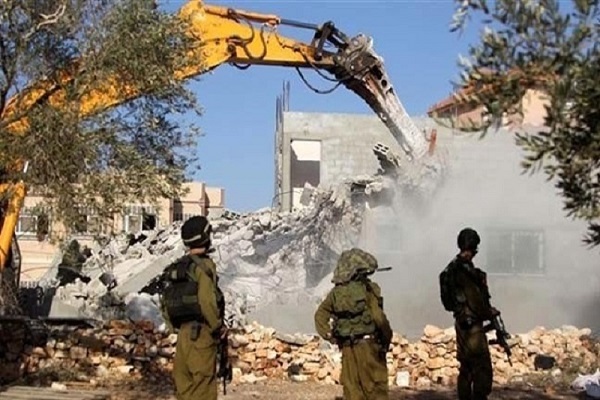 The Palestinian Information Center reported on Thursday that Israeli forces delivered demolition notices and ultimatums in al-Walaja village, which is located west of Bethlehem city.

The threatened structures include three homes, a number of cattle shelters, one water well and a farmland.

Palestinian residents possessed documents proving their ownership of the lands located near an Israeli settlement in the area, the report said.

Israeli authorities usually demolish Palestinian homes in the occupied West Bank, claiming that the structures have been built without permits. They also sometimes order the Palestinian owners to demolish their own homes or pay the demolition costs to the municipality if they do not.

Israeli prime minister Benjamin Netanyahu has announced that he would start plans for annexing more areas in the occupied West Bank, in accordance with US President Donald Trump’s "deal of the century" scheme, further infuriating Palestinians.

Trump officially unveiled his scheme in January at the White House with Netanyahu on his side, while Palestinian representatives were not invited.

The proposal gives in to Israel’s demands while creating a Palestinian state with limited control over its own security and borders, enshrining the occupied Jerusalem al-Quds as “Israel’s undivided capital” and allowing the Tel Aviv regime to annex settlements in the West Bank and the Jordan Valley.

Trump's highly provocative scheme, which further denies the right of return to Palestinian refugees, is also in complete disregard of UN Security Council resolutions and rejected by the vast majority of the international community.

Hardline Israeli settlers on Thursday attacked a quarry in Jamma'in village, which is located southwest of the Palestinian city of Nablus in the occupied West Bank.

The settlers stormed the quarry, spray-painted remarks on its walls and tried to set fire to a bulldozer and an excavator on the site, Press TV reported.

In December last year, the Palestinian Ministry of Foreign Affairs and Expatriates called on the international community to place Israeli settlers involved in attacks and acts of terror against the Palestinian civilian population in the occupied territories on their terror lists, and put travel bans on them.

For years, Israel has clearly allowed its settlers to assault Palestinians and inflict damage on their property as one of its policies. This has included provision of military protection for the attackers, and in some cases troops' active participation in the assault, B’Tselem concluded.

According to human rights groups, incidents of sabotage and violence by extremist settlers against Palestinians and their property are a daily occurrence throughout the West Bank.