Palestinian Leaders Call for Day of Rage against Bahrain-Israel Deal

General
News ID: 3472543
TEHRAN (IQNA) – Leaders of Palestinian groups named Tuesday, September 15, the day of rage against the shameful deal between the Bahraini regime and Israel for normalization of ties. 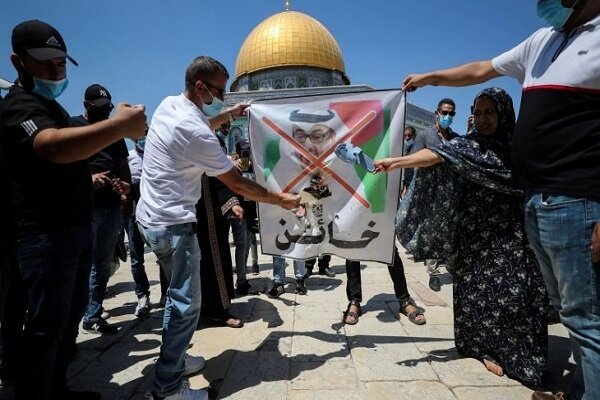 In a joint statement, they urged that the Palestinian flag be raised on all buildings on this day in a demonstration of strict opposition to the deal.

The statement said Friday, September 18, will be declared a day of mourning and black flags will be raised on buildings.

It called on all Palestinian groups to unite and join these popular moves against normalization and stressed that there is no voice louder than resistance against occupation.

US President Donald Trump on Friday announced the normalization of diplomatic relations between Bahrain and Israel.

Bahraini officials are expected to join Emirati and Israeli representatives at the White House next week for a formal signing ceremony.

All Palestinian factions have unanimously denounced the normalization agreements between Israel and the Persian Gulf Arab countries as a stab in the back of the oppressed Palestinian nation and a betrayal of their cause.