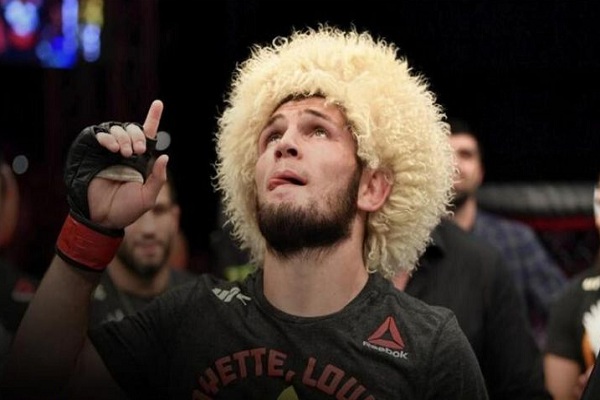 Nurmagomedov, one of the world's most popular Muslim athletes, issued the strongly-worded statement against Macron for his defense of caricatures of Prophet Muhammad (PBUH) under the pretext of freedom of expression.

"May God mutilate the face of this brute and that of all his followers who offend the feelings of over 1.5 billion Muslims under the slogan of free speech," the 32-year-old world lightweight champion wrote in an Instagram post after announcing his retirement earlier this week, firstpost.com reported.

"May God humiliate them in this life and the next," added Nurmagomedov, who hails from Russia's southern Muslim-majority region of Dagestan.

His post, accompanied by a picture of Macron with a black shoe print across his face, has racked up more than 1.9 million likes on his account that has 25 million followers.

On Friday, several dozen protesters gathered outside the French embassy in Moscow with posters and caricatures of Macron. They were seen burning a photo of the French leader.

Macron defended freedom of expression and condemned what he called “Islamist” violence this month after an extremist beheaded a teacher in a Paris suburb who showed pupils caricatures of Prophet Muhammad (PBUH) in a lesson on free speech.

Macron's stance on the cartoons as well as comments on Islam have prompted a backlash across the Muslim world.

After a knife-wielding man killed three people at a church in southern France on Thursday, Macron vowed the country "will not give up on our values".

Earlier this week, the leader of Russia's Muslim-majority republic of Chechnya, Ramzan Kadyrov, accused the French leader of provoking Muslims and compared him to a "terrorist".