General
News ID: 3472971
TEHRAN (IQNA) – A rally was held Wednesday in front of the French embassy in Tehran to condemn recent republication of insulting cartoons about the Holy Prophet (PBUH) in France and Islamophobic remarks by French officials. 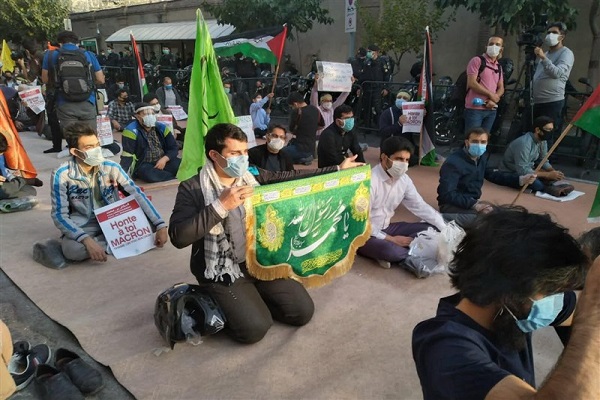 The demonstrators chanted slogans against French officials and the world arrogance and denounced desecration of Islamic sanctities in France.

They also condemned French President Emmanuel Macron’s support for the insulting cartoons and demanded an unconditional apology from him.

Those taking part in the rally also called for the expulsion of the French ambassador and urged joining a boycott of French products.

Earlier this month, French President Emmanuel Macron pledged to fight “Islamist separatism”, which he said was threatening to take control in some Muslim communities around France.

He also described Islam as a religion “in crisis” worldwide and said the government would present a bill in December to strengthen a 1905 law that officially separated church and state in France.

His comments, in addition to his backing of satirical outlets publishing caricatures of the Prophet Muhammad (PBUH), have drawn widespread condemnation from Muslims across the world.