General
News ID: 3473257
TEHRAN (IQNA) – The Organization of Islamic Cooperation stressed the importance of fighting terrorism and defending the cause of Palestine. 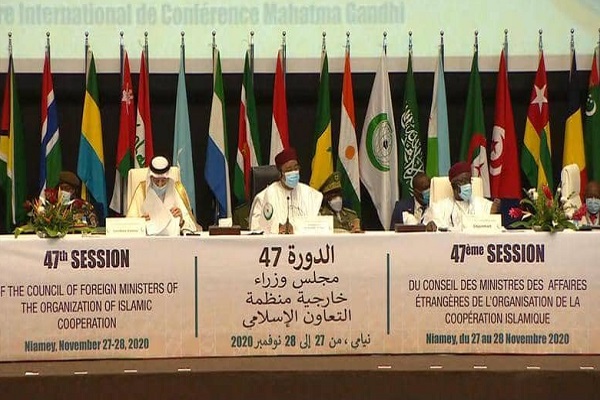 The 47th meeting of the OIC Council of Foreign Ministers is underway in Niamey, Niger.

It began on Saturday with an emphasis on unity of Muslim world in addressing Islamophobia for peace and development.

The participants discuss the issue of Palestine, countering Islamophobia, Muslim communities in non-member states, and fighting extremism, terrorism and violence, among other things.

Addressing the opening session on Saturday, OIC Secretary General Yousef Ahmed Al-Othaimeen described terrorism as the most dangerous threat the world is facing.

He said the OIC underlines that there is no link between Islam and terrorism.

He also referred to recent anti-Islam acts and said that international efforts are needed to ban desecration of religious sanctities.

Niger President Mahamadou Issoufou was another speaker at the event who said Islam is the religion of peace and compassion and that the religion has nothing to do with terrorism.

The OIC foreign ministers will adopt resolutions and proclamation of the 'Niamey Declaration' on Sunday and the OIC Secretary General and president of 47th session of CFM are scheduled to hold a joint press conference after conclusion of the two-day meeting.