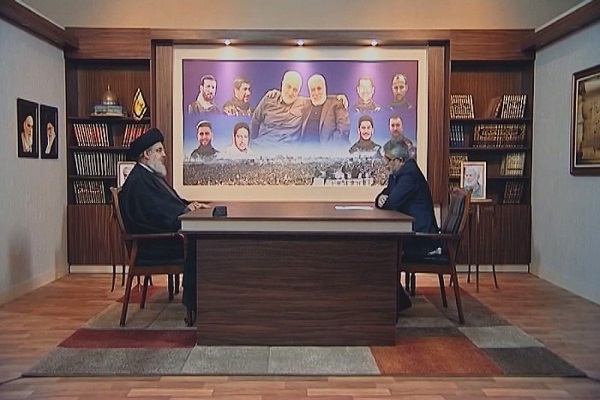 Speaking in an interview, conducted by Truth Documentary Film Center, and broadcast by Iran’s English-language Press TV television news network, Sayed Hassan Nasrallah described Lt. Gen. Soleimani as a humble commander, who always visited his friends and aides on the battleground, inquired about what his fighters needed and was present on the frontline.

“Such a personality gave him a special privilege in terms of management and command,” Nasrallah said.

The Hezbollah chief added, “One of the interesting points about Hajj Qassem’s behavior was that he was always a supporter of combatants and treated them with great respect and ardor.”

“Such a characteristic had moral and spiritual effects on officials. It also allowed him to hear all opinions, and not just the viewpoints of people who came to visit him in his office [in Tehran]. This helped Hajj Qassem to have a better attitude, to consider other aspects, and to have a wider and deeper mindset about his responsibilities,” Nasrallah said.

He emphasized that Lt. Gen. Soleimani never sufficed to written reports he received from authorities, but would rather appear on the battleground to observe the situation with his own eyes, talk to people with different military ranks. 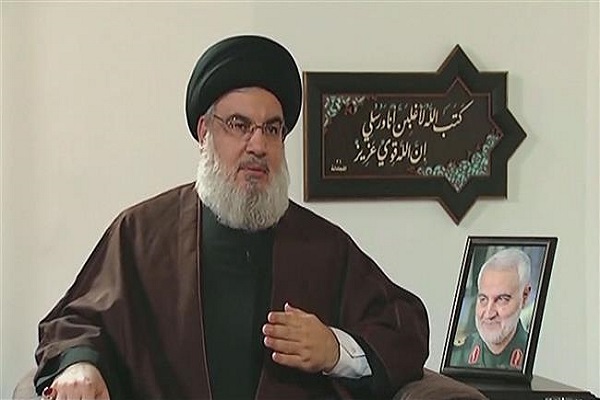 Nasrallah noted that such behavior is not a common method among military leaders worldwide.

“Of course, all great Iranian commanders visited soldiers and fighters during the Sacred Defense (the 1980-88 Iraq’s imposed war on the Islamic Republic). But, this exists only in Iran and is not seen anywhere else,” the Hezbollah secretary general said.

He also hailed the late Iranian commander’s indefatigability. “We may all get tired and feel that problems are putting a lot of pressure on us; but Hajj Qassem never stopped working. He had a lot of patience and endurance in the face of hardships and problems. I’m not exaggerating, but I have never seen anyone who could withstand hardships like him,” Nasrallah commented.

Nasrallah went on to say that lt. Gen. Soleimani was also a very hardworking and persistent person and his modesty is unmatched.

“He was really humble even in meeting ordinary people unlike military commanders who usually tend to be swollen with pride and arrogant,” the Hezbollah head said.

“Hajj Qassem Soleimani’s school of thought means risk-taking. Death threatened him all the time. But he was always at the forefront, and I always disagreed with him on the matter. I always tried to keep him behind the front line, but none of us could force him to do so,” Nasrallah said.

The Hezbollah chief said the late top Iranian anti-terror commander came to visit him in Beirut's southern Dahieh neighborhood during the 33-day Israeli military onslaught on Lebanon in the summer of 2006, despite repeated warnings that such a step would seriously put his life at risk.

“During the 33-day war, Hajj Qassem helped us a lot. Iraqi commanders said he was always at the forefront of the fight against Daesh Takfiris and was with Iraqi and Syrian forces. This is another personality trait of his,” Nasrallah highlighted.

“I must say that the presence of Hajj Qasem in Lebanon in the first days of the war was very vital and important. He did not have to come to Lebanon. He could stay in Tehran and follow the news of the war or could go to Damascus, which is closer to us and was not under Israeli attacks at the time. But, Haj Qassem insisted on coming to Lebanon.

“On the first day of Hajj Qassem’s presence in Lebanon, we arranged a meeting. He arrived in Lebanon in the first days of the war. After the meeting, Hajj Qassem stayed in Lebanon for a few days and returned to Tehran to report to Leader of the Islamic Revolution Ayatollah Seyyed Ali Khamenei,” Nasrallah said.

Nasrallah pointed out that Lt. Gen. Soleimani brought him back a message from Ayatollah Khamenei, which he had written in his own handwriting.

The theme of the letter was that the war will be very hard and intense, and Ayatollah Khamenei said the Israeli aggression was like Battle of the Trench, a defense by Muslims of Yathrib (now Medina) from Arab and Jewish tribes in March 627 AD. The Leader of the Revolution also referred to verses from the Holy Quran, and stressed that Hezbollah will win the hard and terrible war, Nasrallah said.

“We were very happy that the Leader of the Islamic Revolution spoke confidently about our victory, while the whole world was talking about how Hezbollah could stand against the United States, Europe, the West and other Arab countries that are supporting the Zionist regime,” he noted.

“Hajj Qassem’s school of thought had its roots in the school of [the revered founder of the Islamic Republic] Imam Khomeini, guidance of Ayatollah Seyyed Ali Khamenei and experience of the Sacred Defense,” Nasrallah said.

He described his relationship with Lt. Gen. Soleimani as brotherly, saying, “I was always ready to sacrifice my life for Hajj Qassem.”

Nasrallah concluded that Lt. Soleimani held a high position in his heart firstly due to the friendship, brotherhood and feelings that existed between them, and secondly because his existence served Islam, Muslims, the Muslim world as well as the axis of resistance more than anyone else.