General
News ID: 3475040
TEHRAN (IQNA) – Palestinian resistance movement Hamas vowed to resist the Israeli policy of blackmailing Palestinians, saying the great Palestinian people and resistance will not keep silent in the face of Tel Aviv violations and crimes, including the regime’s delay to lift the 14-year siege on the Gaza Strip. 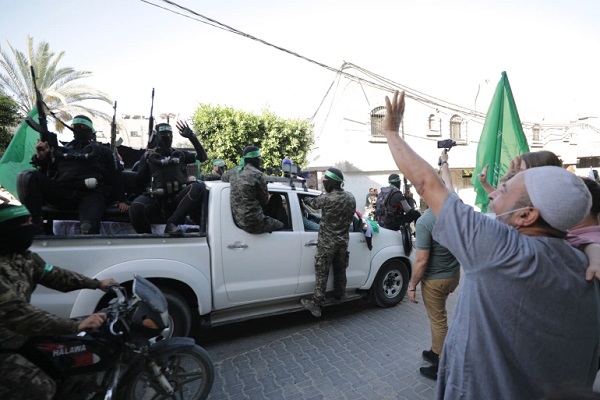 “We are ready for all options and we will resist by any means and the enemy will not succeed in its policy of blackmailing,” Hamas said in a statement on Tuesday, after its leader in the Gaza Strip, Yahya Sinwar, warned that Israel has no will to end the humanitarian crisis in the besieged enclave.

According to Palestine Today, Hamas underlined its preparedness to respond to Israel’s failure to lift the siege on Gaza, but said the lifting of the siege is not linked with releasing Israeli prisoners.

The Zionist prisoners will be exchanged only with Palestinian prisoners, it said, adding, “We will not accept pressure on our nation and we will not allow different cases to get mixed up.”

The Palestinian movement also lauded Palestinians in occupied Jerusalem al-Quds for their daily struggle to defend their land against Israeli acts of aggression, vowing to support the al-Quds cause at any cost.

Tel Aviv imposed the all-out land, aerial, and ground siege against Gaza in 2007 after Hamas rose to power in the enclave. Israel has been controlling Gazans’ access to their basic necessities through the siege.

Since the beginning of the blockade, Israel has waged three wars on Gaza. The Israeli military also conducts regular air raids on Palestinian civilians in Gaza under the pretext of fighting Hamas.

Early this month, Sinwar asserted that Gaza’s siege will be broken soon, while warning Israel against any offensive after its 11-day war against the Gaza Strip last month turned into a humiliating defeat for the occupying entity.

Palestinian resistance groups also issued a statement on Tuesday, saying they will not be passive in the face of the Israeli regime’s delay to lift the siege for Gaza’s reconstruction, urging the regime to end its provocative actions in Jerusalem al-Quds.

They commended Palestinian youth in northern parts of the occupied West Bank for standing up to the Zionist plots to steal more Palestinian land and voiced support for the Palestinian struggle against the occupying regime.

“We also stress our support for our heroic prisoners in the occupying regime’s jails, especially those who have gone on hunger strike, and we also call for increased popular plans in support of freedom for Palestinian prisoners,” the resistance groups added.

They also denounced a recent decision by UN Secretary General Antonio Guterres to leave Israel off the annual blacklist of parties responsible for grave violations against children.

“We strongly condemn the UN Secretary General’s decision not to include the occupying regime in the list of the infamous, as it has committed war crimes including killing children, spreading terror among civilians, destroying people’s homes and destroying residential towers,” the statement read.

Elsewhere in the statement, the Palestinian resistance groups asked mediators to pressure Israel to end its siege of the Gaza Strip, finalize the case of Gaza’s reconstruction following Israel’s devastating war on the enclave, and end the regime’s incendiary measures in Jerusalem al-Quds, the Sheikh Jarrah and Batn al-Hawa neighborhoods, where Palestinians are faced with forced displacement from their homes, Press TV reported.

Meanwhile, al-Quds Brigades, the military wing of the Palestinian Islamic Jihad, staged a military drill to mark the victory of Palestinians in the 11-day war in Rafah city.

The drill was attended by al-Quds Brigades fighters, who showcased the group’s weapons and military equipment.

The developments come a week after Israel launched airstrikes on the Gaza Strip, breaching a unilateral ceasefire on May 21 which ended the war on Gaza, which killed over 260 Palestinians, including 66 children, and displaced tens of thousands of Palestinians there.

Nevertheless, Israel has continued its violence against Palestinians in the tense neighborhood of Sheikh Jarrah and other areas of the occupied territories in recent weeks, including a Tuesday attack on al-Aqsa Mosque.