General
The link was copied
News ID: 3475202
TEHRAN (IQNA) – Muslims taking to the streets in a bid to educate Kiwis about their faith have copped verbal abuse. 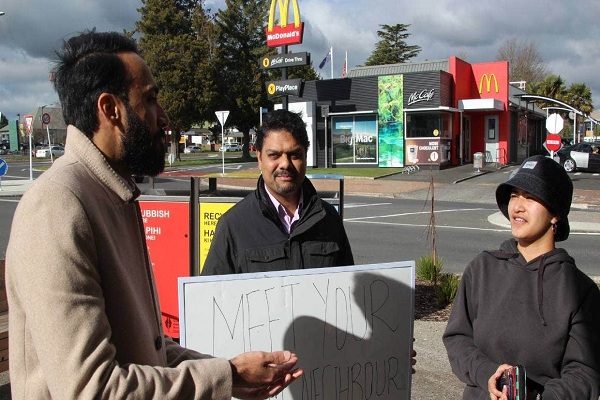 Representatives of the Discover Islam NZ project have been visiting New Zealand towns to talk to everyday Kiwis and break down Muslim stereotypes.

In Tokoroa on Thursday, project member Haris Ahmed said engaging with people on the street had not always met with success, or compassion.

“We were down in Whanganui and this couple came up to myself and one of my colleagues [who was] holding a board that said ‘Meet a Muslim’. They were about 45-50 years old … The guy said: ‘You know why the Christchurch attack happened … because you Muslims choose to come to our country, that is why you guys got killed, if you guys weren’t here, this wouldn't have happened.’”

Ahmed said the man took the opportunity to address two imams having sit-down conversations in a nearby cafe, but only to add: “I have nothing to talk about. It’s just because you guys chose to come to this country, and you got killed.”

The group had similar experiences in Huntly and Raglan, with comments such as “Go back to your country, I don’t want to see you Muslims,” Ahmed said.

But for Mirza Ahmab and campaign organizer Imam Sabah Al-Zafar, the handful of incidents was outweighed by the 90-95 per cent who “encourage us and try to hug us, and support our campaign”.

The organization is now branching out from its Meet a Muslim and Meet Your Muslim Neighbor campaigns to begin Meet a Muslim Family which will see people welcomed into Muslim homes.

Encouragingly, Ahmed also had a success story from the first anniversary of the Christchurch shootings when delivering meeting leaflets in Hoon Hay.

“He said, ‘I want to wear your T-shirt … and I’ll be out there on March 15 … I am going to wear this T-shirt, and talk to people and tell them Muslims are good, they are really nice people.’

“So that happens to you, too.”

Discover Islam NZ manager Al-Zafar, an Australian imam born in Japan and serving in the Waikato, said the focus of the campaigns, including the new home visit initiative, was bridging the gap between negative portrayals and the truth.

The project’s website said the organization aimed to introduce New Zealanders to the true teachings of Islam and to remove misunderstandings and was “dedicated to creating a more understanding, peaceful and harmonious society”.

As well as the street and cafe campaigns, members meet with members of Parliament, mayors, interfaith leaders and elders on marae.

Al-Zafar said United Nations experts acknowledged that anti-Muslim feeling had been on the rise since the 9/11 attacks.

“We believe there are a handful of Muslims defiling the name of Islam for ulterior motives … but this is not who we are. This is what we have been saying for decades.”

Because the Christchurch shooter was an Australian and the event was in New Zealand, everyone didn't immediately assume all Australians or New Zealanders were bad, he said.

“It is the same with Muslims.”

As well as the direct approach, his organization encouraged members to take part in community events like tree plantings, food drives and donating blood.

Muslims were told they didn’t just have obligations and responsibilities to their creator, he said, but to be a good Muslim you had to show that same sympathy and empathy towards creation itself.

“So this is the reason we go out and about and play our productive part in society.

“After the Christchurch attacks everyone came together, but we should have done something before that, so nothing like that ever happened, and doesn’t happen in the future either.

“That unity after the Christchurch attack should be something permanent and more lasting … this campaign is not just about fighting off Islamophobia, but it’s about fighting off all sorts of racism and discrimination against people of various backgrounds, ethnicities.”

Like the other campaigns, Meet a Muslim Family would be nationwide.

“People can come in, have a coffee, some communion time. Our campaigns tend to be at a certain time, but this one will mean a visitor can co-ordinate with the host and come at a convenient time that suits both of them.

“We have families ready all across New Zealand … This has never happened in New Zealand, and we’re really excited about it.”

Those wishing to take part could sign up through the Discover Islam NZ Facebook page, Al-Zafar said.