Mecca Grand Mosque Cleaned with 15,000 Liters of Sanitizers Ahead of Tawaf Al-Qudum

General
The link was copied
News ID: 3475277
TEHRAN (IQNA) – The General Presidency for the Affairs of the Two Holy Mosques in Mecca and Medina said that it used on Saturday 15,000 liters of sanitizer in its cleaning operation of the Grand Holy Mosque in preparation for receiving the first batch of pilgrims to perform Tawaf Al-Qudum (Tawaf of Arrival). 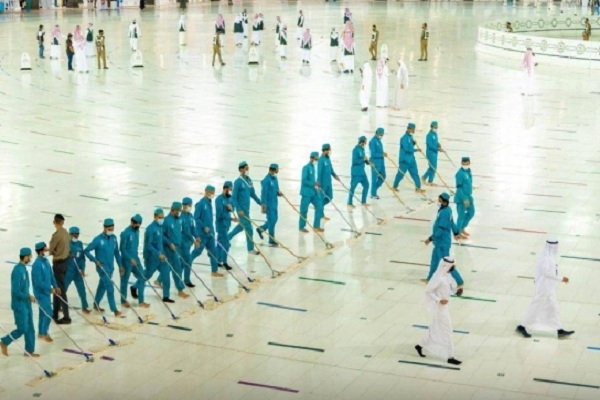 He added that more than 500 sensor-equipped hand sanitizer dispensers, 20 biocare devices and 100 robots were also deployed to ensure the safety of pilgrims.

Al-Jabri also said that the presidency has installed 7 high-resolution, non-contact thermal cameras and temperature scanners to detect temperatures of pilgrims, adding that more than 30,000 bottles of Zamzam water were distributed to the first batch of pilgrims.