General
The link was copied
News ID: 3476477
TEHRAN (IQNA) – Polish Muslim leader Maciej Szczęsnowicz cried when he saw migrants at the border for the first time, hungry and exhausted from the ordeal of being stuck while trying to enter from Belarus. 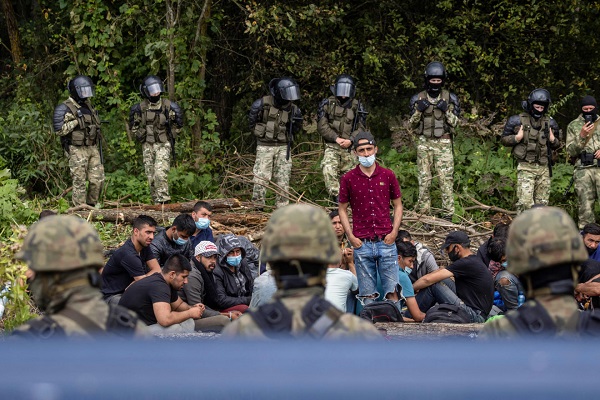 The chairman of the local Muslim community in the eastern Polish village of Bohoniki, Szczęsnowicz saw people so tired they could no longer stand, so hungry that they picked mushrooms from the ground to eat and when given an apple, ate the seeds.

But what hurt him the most was hearing the sounds of their suffering.

“It’s the sound of the crying and screaming of the children," he said. "It’s the worst thing.”

As Poland has seen migrants from the Middle East crossing from Belarus into an area of forests and swamps, Szczęsnowicz has gotten to work helping to collect clothing and prepare food for them.

A large number of migrants appeared this week at Poland's border, intensifying a political standoff between the European Union and Belarus. With a buildup of forces on the border, Szczęsnowicz is also helping to feed soldiers and other service people protecting the country.

The AP visited him on Saturday in a restaurant where he and other volunteers were preparing a large pot of steaming chicken and vegetable soup. It was destined for soldiers and other guards on the border, but he hopes that some also makes its way to the migrants.

While the border zone is off-limits due to a state of emergency in force since early September, his delivery of soup to the border has given him access others do not have — and a view of the suffering of the people just across razor wire fences in Belarus.

Thousands of migrants have been trying for months to slip through Poland's eastern border from Belarus, hoping to make their way toward Western Europe.

To Polish and EU politicians, the arrival of the migrants, most of whom are Muslims from the Middle East, is viewed as a problem to stop.

But there is a significant number of Poles who simply see human beings in need of a helping hand and have been seeking ways to help them. Medics have been going into the woods to provide medical help to those who manage to slip through. They are often sick or injured. Meanwhile, people across the country have been donating money to organizations taking food and other help to the migrants in the forests.

Most of the volunteers are Roman Catholic, as is their country, but Szczęsnowicz heads the Muslim community in Bohoniki, where a tiny minority still lives that is descended from a population of Muslim Tatars who settled in the area 600 years ago.

Still, he says his Muslim identity is only secondary when it comes to helping migrants.

"We are supposed to help everybody who entered the Polish border. Everybody, yes, because they are human,” he said.

Already the situation in the region can be deadly, with nine deaths reported so far, including the death of a young Syrian man reported on Saturday. The risks grow as winter approaches.

Szczęsnowicz fears that “here will simply be more deaths.”