General
News ID: 3476691
TEHRAN (IQNA) – The tiny village of Bohoniki has been at the forefront of the crisis on the Poland-Belarus frontier – and has buried its victims 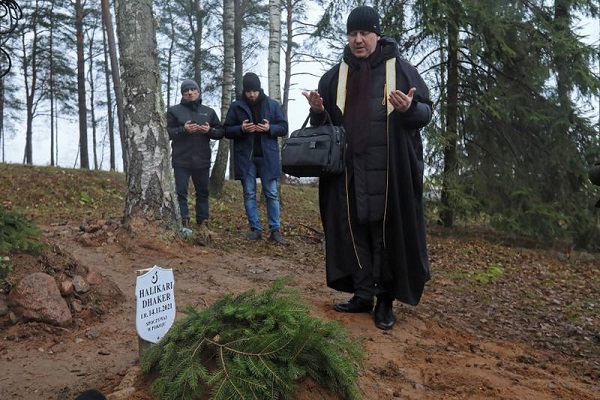 Muslims in Bohoniki have already held four funerals for migrants who died trying to cross the fortified frontier from neighboring Belarus and fear more will follow as snow falls on its silent hillside graveyard.

As the security forces play a daily game of cat-and-mouse with desperate migrants in the freezing forests, members of the tiny Tatar community of eastern Poland have helped take food and clothing to fellow Muslims in need.

But the banner hanging outside the village’s mosque also expresses full support for the work of the military, highlighting the competing emotions of the 2,000-strong Tatar population who combine adherence to their religion and sympathy for the newcomers with a strong loyalty to Poland.

“We are refugees after all,” said Eugenia Radkiewicz, who greets visitors at the mosque.

Bohoniki has one of the two mosques that survived wars, repression and regime change in eastern Poland during the 20th century. The region is the stronghold of one of the oldest Muslim communities in Europe.

The village, about 15 kilometers from the frontier with Belarus, was donated by a grateful Polish king more than 300 years ago for the help given by Tatar warriors from Crimea in defending his eastern borders. Their blood spilt in battle helped form the foundations of the modern Polish Republic, former president Bronislaw Komorowski has said.

The modern inheritor of the mantle of defenders of the eastern borders – the Polish army – is posted just a kilometer outside of the village. Soldiers huddle around a brazier on crossroads where migrants fleeing for Western Europe could come.

Hand-written posters nailed to the trees on a road leading to the village thank the soldiers for “defending our borders”.

Dozens of posters giving “strong backing” to the military can be seen tied to fences in prominent positions in the nearby town of Sokolka – and pinned to the fence outside the Bohoniki mosque.

The descendants of the Tatar fighters – who now number about 30 among the 100-strong population of the village – continue to pray at the small wood-paneled mosque. They work in the nearby towns and the quarry on the village’s outskirts.

They have also been prominent in helping to collect food parcels to lift the misery of those hiding in the forests that cover swathes of land in this part of eastern Poland as migrants try to breach fences and evade border forces.

The crisis has eased, with hundreds of people having been flown back to Iraq after giving up on their dream of a new life in Europe.

The EU has accused Belarus of orchestrating the movement of migrants – many from Iraqi Kurdistan – by offering visas and ushering them to the border in retaliation for imposing sanctions on the autocratic regime of President Alexander Lukashenko.

Lukashenko visited a warehouse on Friday on the Belarus side of the border where about 2,000 people were living in temporary accommodation. He told them that his country would not stand in the way if they wanted to try to cross the border.

“It’s not a dilemma for us to bury them with dignity rather than in a nameless grave without any respect,” Radkiewicz said. “If there are more bodies that need to be buried, then we will do that. We will make space.”

A tight military cordon stops anyone without permits from getting within three kilometers of the border. Ms Radkiewicz said one of the few people that were allowed passage was Maciej Szczesnowicz, the local Muslim leader.

“From our Muslim community, there is a lot of help. We also cook soups for the soldiers; we serve 300 portions every day," Szczesnowicz told Reuters.

The Polish government has been accused by rights groups of violations of international law in its response to the migrants, including pushing asylum seekers back into Belarus.

Poland, a mostly Catholic, ethnically homogenous country, is run by the Law and Justice party. Its leader has hit out at migration from the Middle East, saying the arrivals could bring diseases and parasites.

Senior government ministers in September painted the migrants as potential terrorists and sexual deviants – releasing graphic photos from seized SIM cards in an attempt to bolster their call for Poles to back the defense of the border.

The Polish authorities have sought to dissuade migrants by sending a text message to people near the border that states: “The Polish border is sealed. BLR [Belarus] authorities told you lies. Go back to Minsk!”

It links to a web page that claims “illegal border crossing” is a crime. “Crossing the border illegally and destroying border security measures may result in imprisonment,” it warns. “Worsening weather conditions may be dangerous to life and health.”

Lilla Swierblewska, who works with a charity from the Polish city of Wroclaw, has helped to supply dozens of meals to the migrants.

She has a history of helping people, including Syrians who arrived in Europe in 2015 to escape war.

“They have always come,” she said at her traditional Tatar food restaurant in the city of Bialystok, 50 kilometers from Bohoniki.

“First we were buying and sending food but as things became more difficult for these people stuck at the border, I started to cook.”

She made 100 single-pot meals in the first wave and then 60 more.

“I was just helping out because I’m a human being and maybe at some point in my life, I will need help from other people when I am without food or shelter,” she said. “That’s just the way I was raised.”