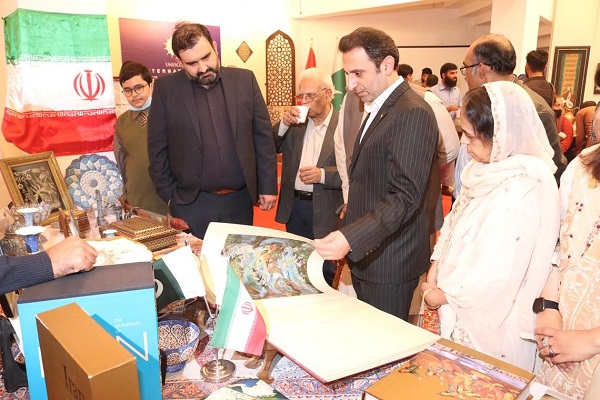 The event has been organized on the occasion of the International Day of Islamic Arts with the cooperation of three countries of Iran, Pakistan, and Turkey.

Calligraphy, painting, ceramics, pottery, and Islamic architecture are among the main themes of the exhibition, according to Iranian cultural center in Pakistan.

Addressing the inauguration ceremony, Iran’s cultural official in Lahore Jafar Ronas said that art is the common language of human beings as every individual, with any nationality and language, can understand artistic beauties.

The exhibition, he continued, aims to introduce the beauties of Islamic arts and send the message of peace and friendship.

The most prominent shared art between Muslims is calligraphy of the Quranic verses, he said, pointing to the use of this art in historic inscriptions and mosques.

A representative of Turkey’s Yunus Emre Institute also addressed the ceremony, noting that Islamic arts have been developed under the influence of regional and cultural factors. “As an effective leverage, Islamic art can play a major role in stabilizing peace and security of the region.”

A calligraphy workshop is also slated to be held on the sideline of the exhibition.

Back in 2019, UNESCO designated November 18 as the international day of Islamic arts and various countries have since held ceremonies to mark the event.