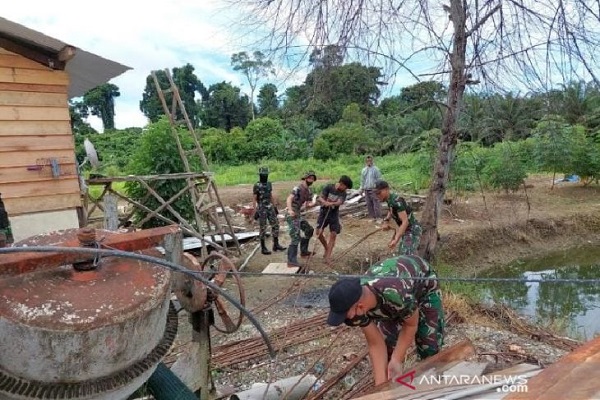 The community service was conducted by several personnel of the 711/Rks Infantry Battalion's Indonesia-PNG Border Security Task Force, according to a press release that ANTARA quoted here Sunday.

The soldiers and villagers worked together to lift building materials needed to construct the mosque that locals would use as a house of worship, and a learning center for their children.

Alan, a respected figure of local Muslim community, thanked the army personnel who had assisted them to build the mosque.

Meanwhile, the task force's commanding officer, Second Lieutenant Marbun, said the community service was aimed at maintaining the emotional connect of his men at the Pitewi security post with locals.

The soldiers, stationed near the Indonesia and PNG land border, are not only demanded to carry out their main duty but they must also be mindful of the difficulties faced by local residents, he said.

By doing so, their presence would well be received by the members of local community, he said, adding that his task force's personnel would always be ready to help locals find solutions to their problems anytime they need.

For the soldiers stationed in Keerom District, helping locals build their houses of worship has become a part of their community service initiatives.

They have extended voluntary assistance to teachers at 12 elementary schools in the sub-districts of Sota, Neukenjerai, Eligobel, and Ulilin in Merauke District since July 2019.