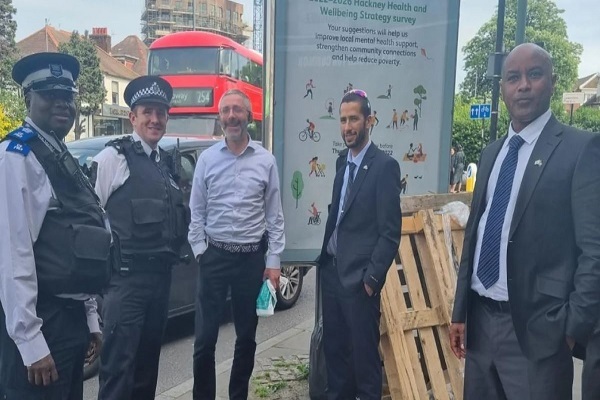 Hackney Police said on Twitter that it was "delighted" to host the delegation from Israel, who it said also accompanied officers from Stamford Hill police, a sub-district of Hackney, on a patrol.

The visit comes a week after Abu Akhleh was shot dead by Israeli forces while covering a raid in the occupied West Bank city of Jenin.

Israel had initially said that Palestinian gunmen may have been responsible for the death, but then backtracked on its statement, saying it was unclear what transpired.

The Muslim Association of Britain, a UK-based organisation that has been active in engaging with the wider British public, slammed the visit, calling it "indefensible".

"Israeli police violently attacked mourners and pallbearers at Shireen Abu Aqleh's funeral just a few days ago and they routinely raid Al Aqsa Mosque, arresting & assaulting worshippers. How were they welcomed and allowed to freely parade in one of the most ethnically diverse constituencies in London with one of the biggest Muslim communities in the UK, given their appalling violence, racism and Islamophobia?

Israel's police chief ordered an investigation into the use of force at the funeral, after US Secretary of State Antony Blinken and UN Secretary General Antonio Guterres condemned Israeli police conduct.

NetPol, a police monitoring network, also criticised the visit, writing on Twitter: "Less than a week after Israeli Police beat mourners at the funeral of Palestinian-American journalist Shireen Abu Akleh, why on earth is Hackney Police hosting a delegation of police from Israel? What on earth are they hoping to learn from each other?"

Pro-Palestine activists based in Hackney, who have repeatedly campaigned at factories for Israel's largest private arms manufacturer, Elbit Systems, also criticised the visit.

In recent months, Hackney police have also faced fierce criticism over its own policing techniques.

In March, there was a national outcry after it was revealed that police officers had strip-searched a 15-year-old black schoolgirl, known as Child Q, who was falsely accused of possessing cannabis.

Without parental consent and with no other adults, Child Q was subjected to a traumatic search by officers in December 2020 that was only made public after the publication of a safeguarding report initiated by the council.

In a letter from the Metropolitan police to the Mayor of Hackney, deputy assistant commissioner Laurence Taylor wrote: "the MPS acknowledge that events in the history of policing in London have led to a breakdown in trust and confidence with some communities."