One Million Suspected Cases of Cholera in War-Torn Yemen

General
News ID: 3464736
TEHRAN (IQNA) – The International Committee of the Red Cross (ICRC) said the number of suspected cholera cases in war-torn Yemen has hit one million amid the ongoing Saudi military campaign against the impoverished nation. 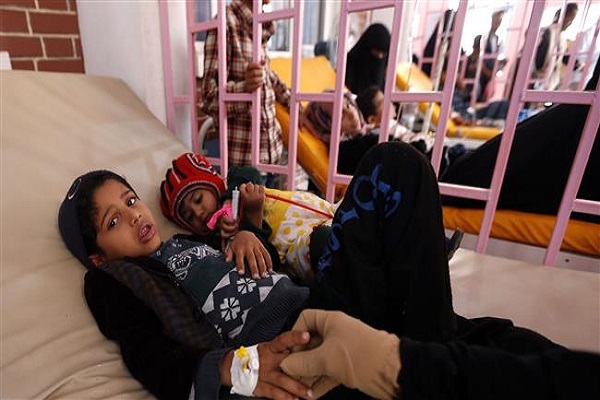 The ICRC also said Thursday that more than 80 percent of the Yemeni population lacks food, fuel, clean water and access to healthcare.

The World Health Organization (WHO) has recorded 2,219 deaths since the cholera epidemic began in April, with children accounting for nearly a third of infections, Press TV reported.

On Wednesday, the Oxfam charity group warned that more than 8.4 million Yemenis are now at acute risk of famine due to Saudi Arabia’s crippling blockade of Yemen’s key ports, which is causing a halt to the delivery of food, fuel, and medicine.

Food prices have shot up by 28 percent since early November, when the Saudi-led coalition tightened the siege. That has made it unaffordable for poor families--already hit by the collapse of the economy --to buy food.

Clean water supplies in towns and cities have been cut due to fuel shortages.

Yemen is also suffering from diphtheria epidemic, with aid groups warning that the spread of the disease is inevitable in Yemen due to low vaccination rates, lack of access to medical care and so many people moving around and coming in contact with those infected.

At least a million children are at risk of contracting the disease.

Saudi Arabia and a group of its allies have been bombing Yemen since 2015 to put its former Riyadh-friendly government back in the saddle. More than 12,000 have died since the war began.

Now, more than eight million Yemenis are on the verge of starvation, making the country the scene of, what the UN calls, the world’s worst humanitarian crisis.