General
News ID: 3469047
TEHRAN (IQNA) – On one Friday in late June, Arafat Afaneh greeted the two older white men warmly and invited them into the Islamic Center of Savannah, where he works as the facility manager. 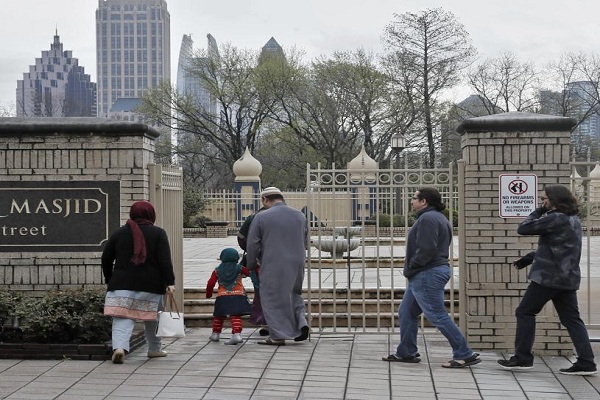 One man said he was Muslim. The other man, he said, was his cousin, who wanted to learn more about Islam.

“We welcome anybody,” said Afaneh. “This is a place of worship.” He gave them a copy of the Quran and brochures on Islam and invited them to stay and listen to the Friday sermon. Something nagged at Afaneh, though, because “they didn’t look happy. They were not smiley or looked like people who were coming to a place to learn. I felt there was something not right about them.”

His suspicions were right and helped prompt a statewide warning. Afaneh said he found out through the Council on American-Islamic Relations (CAIR) that the men were alleged members of anti-Muslim groups Sharia Crime Stoppers and The United West, both labeled hate groups by the Southern Poverty Law Center. After their visits, they were “talking trash about the Islamic center. They said it was disgusting.”

One of the men wrote about his visit to the Savannah mosque in a report published on The United West website: “This would be a mosque that Islamic terrorists and their supporters who are travelling would feel comfortable attending,” he wrote. It also says in an analysis that “the IC of Savannah is the home for Islamic terrorists and their supporters and is used as a training base and regional HQ for developing the strategy for meeting the well-established and very open goal of forming an Islamic caliphate in America …”

Neither man could be reached for comment. Since then, the Georgia chapter of CAIR has warned mosques across the state to be vigilant.

“Georgia mosques are warm and welcoming and they should continue to be warm and welcoming, but we cannot let dangerous bigots take advantage of our hospitality by spying on us and inciting violence against us,” said Edward A. Mitchell, executive director of CAIR-Ga.

Mitchell said a second mosque in Statesboro was also visited. Jante Khabeer was at the Bulloch County Islamic Center in Statesboro in June when he heard knocking on the door. He called out to two men walking away. One pretended to be Muslim but mangled the traditional greeting. He also said “that he was Islam (not Muslim) and that the other man was interested in Islam.” “Something wasn’t clicking,” said Khabeer.

They asked when prayers began. By then, Khabeer suspected something was amiss. He told them 3 p.m., later than the 12:30 start time, when there would be fewer people. They didn’t return. He later recognized them from photos circulated by CAIR. He’s not afraid, just more alert. Many mosques have beefed up security in recent years, following several violent incidents and threats against Muslims in the United States and abroad.

In March, for instance, a massacre at two mosques in New Zealand left 51 people dead and scores injured. Much of the attack was broadcast live on Facebook. In the wake of that attack, mosques in metro Atlanta increased their security.

And, in the US, a man, Craig Stephen Hicks, was arrested and charged with killing three Muslim college students in Chapel Hill, North Carolina, in 2015, which was largely described as a hate crime. Hicks, who pleaded guilty last month, was sentenced to three consecutive life sentences without parole.

The national office of CAIR documented a 17% increase in anti-Muslim bias incidents nationwide in 2017 over 2016. And those only include cases that were reported.

Afaneh now worries followers of anti-Muslim groups might inspire others to do harm or harass members of the mosque. Mosque leaders have beefed up security and asked local law enforcement to conduct extra patrols. He’s also reached out to the FBI.

“We don’t know which one of those dummies might try to come and do something when we’re having a big gathering,” Afaneh said. “We don’t know who might plan some kind of terrorist attack.”

How to Memorize Holy Quran