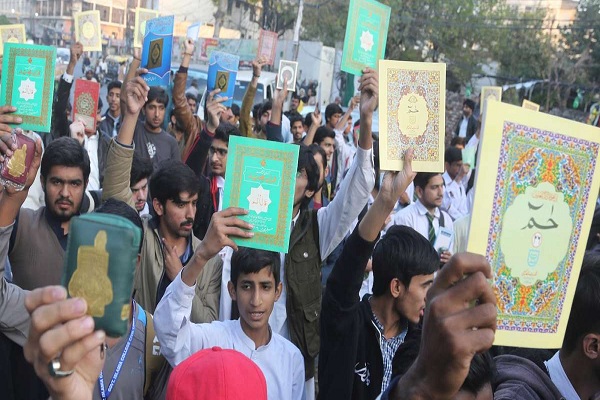 The participants in the rallies demanded the government send back ambassadors of France and Sweden until the punishments to the culprits. Rallies taken out by both factions of Tehrik Labbaik, Tehrik Labbaik Pakistan (TLP) and Tehrik Labbaik Islam (TLI) marched from Data Darbar to Punjab Assembly, whereas TLI rally scheduled to Lahore Press Club to Punjab Assembly was converted into a demonstration at the Press Club. Majlis Wahdat Muslemin (MWM) also took out a rally from Islampura Chowk to Neeli Bar.

Addressing the participants, Khadim Rizvi demanded the government send back the ambassadors of France and Sweden until the culprits are punished. He also demanded the Muslim rulers call an urgent meeting to chalk out a unified strategy to prevent the blasphemy of the Prophet (PBUH) and Quran in future.

TLI acting ameer Qari Farman Ali Haidri led the rally. He said that western governments were moving the world towards the stage where their theory of clash of civilizations could be materialized. He cautioned the European governments to check their extremist elements or they would endanger the world peace.

He demanded the government protect the honor of Holy Quran and Holy Prophet (PBUH). They also demanded release of Ashraf Jalali, Qari Zawwar Bahadur and other leaders. Allama Mubarak Moosvi, MWM provincial leader demanded the Muslim rulers sever ties with the western governments involved in organized blasphemy against the Muslim sanctities, and also chalk out joint strategy to prevent such provocations in future.