Burial Held in Bethlehem for Palestinian Who Died in Israeli Prison

General
News ID: 3474035
TEHRAN (IQNA) – Daoud al-Khatib, an ex-Palestinian prisoner who died while in Israeli custody last September and whose body was handed over to his family yesterday, was buried Saturday in his hometown city of Bethlehem, south of the occupied West Bank. 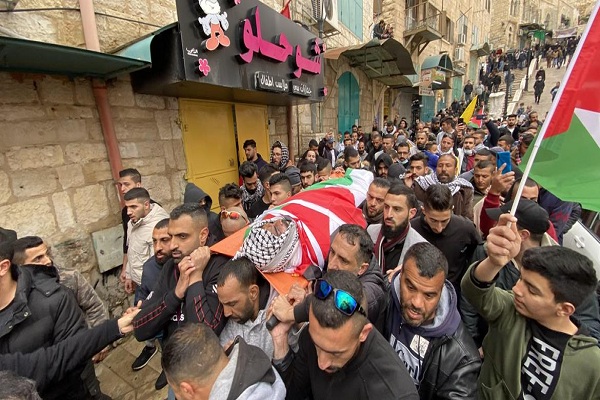 Hundreds of mourners participated in the funeral of al-Khatib, which started at Beit Jala Public Hospital, then moved to Omar bin al-Khattab Mosque in the center of the city, where a funeral prayer was held for him, and finally ended up at the Ebayat Cemetery, where he was laid to rest.

Al-Khatib, 45, died of a heart attack in the Israeli detention facility of Ofer, west of Ramallah, on September 2, only a few months before the end of his 18.5-year sentence.

He was due to be released on December 4, 2020, after being sentenced to 18 years and a half in prison for his activism in resistance against the Israeli occupation.

According to the Palestine Prisoner’s Society (PPS), Khatib had a heart attack in 2017 in Israeli custody and underwent an open-heart surgery shortly thereafter, but the dismal health conditions in prison combined with medical negligence by the Israel Prison Services contributed to the deterioration of his health until his death.

An autopsy carried out to the body of al-Khatib about a week following his death revealed that he died from a severe heart failure resulting from cardiomyopathy and coronary artery disease, aggravated by the Israeli policy of medical negligence towards Palestinian prisoners.

During his detention in Israeli prisons, al-Khatib lost his father, mother and brother without being able to bid them a farewell.