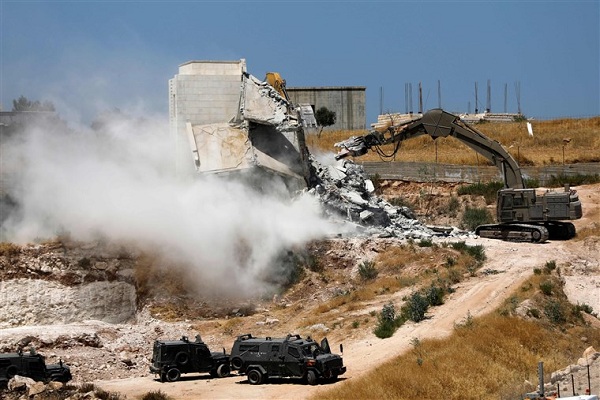 “The Israeli decisions included preventing 27 Palestinians from entering Al-Aqsa and another from entering Jerusalem for allegedly residing illegally in the city, despite the fact that he was born and raised in the city,” the organization said in its monthly report which monitors Israeli violations in Jerusalem. It added that the deported local had applied for “family unification requests multiple times to no avail.”

The report added that Israeli forces had demolished “20 facilities in Jerusalem, eight of which were self-demolished [by Palestinians] following a decision by the occupation’s municipality,” adding that the buildings were located in “Silwan, Tire Baher, Sheikh Jarrah, Jabal Al Mukaber and Anata” neighborhoods.

“Some 1,987 settlers and Jewish students stormed Al-Aqsa last month during their Purim Masquerade celebrations,” Wadi Hilweh said, noting that the raiders had “deliberately performed prayers in the vicinity of the holy mosque.”

Occupation forces, it noted, had continued excavation work in Al-Buraq Square and the Al-Mughrabi Gate near the Western Wall of the mosque.

“On Fridays, the Israeli forces continued arresting and deporting Palestinians from the West Bank, preventing them from performing Friday prayers at Al-Aqsa, deporting them by special buses to the military checkpoints at the entrances to the city, and detaining them for several hours,” the local center said.

The report added that Israeli forces had, on three consecutive occasions, attacked the monastery of the Roman Church in Jerusalem, by “setting fire to its door.”

The information center also registered a total of 135 arrests in Jerusalem in February, including 39 minors and 11 females.

“The arrests took place in the towns of Issawiya and At-Tur, as well as the Al-Aqsa surrounding roads,” the center said.