General
News ID: 3477313
TEHRAN (IQNA) – A Turkish charity society has donated 50,000 copies of the Holy Quran to be distributed among mosques and Quranic centers in Palestine. 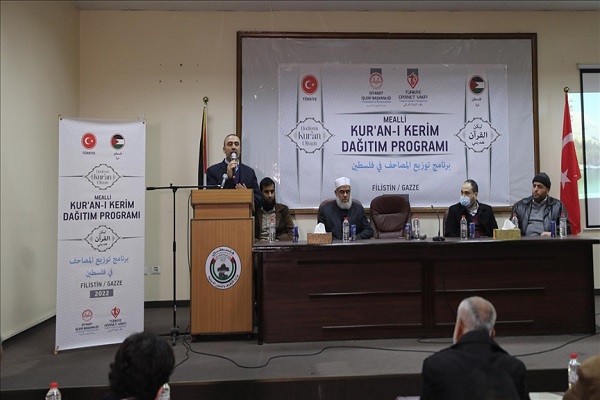 The Ghazi Destek Society that operating in the Gaza Strip on Sunday handed over 20,000 copies of the Quran to the Gaza Awqaf and Religious Affairs Ministry, Anadolu Agency reported.

Hani Thuraya, an official with the society, said it was part of the “Let the Quran Be My Gift” plan which is implemented under the supervision of Turkey’s Religious Awqaf Institute.

He added that as part of the plan, 30,000 more copies of the Holy Book will be handed out in the West Bank and Jerusalem al-Quds.

A Gaza Awqaf Ministry deputy, Abdul Hadi al-Agha, said the initiative comes within the framework of boosting people’s relation with the Noble Quran.

He thanked Turkey’s Religious Awqaf Institute and Ghazi Destek Society for the donations.

The copies bear the name “Al-Aqsa Mosque Quran” and while the campaign slogan “Let the Quran Be My Gift” has been printed on their back cover.

The Ghazi Destek Society, which specializes in humanitarian work, has been operating in the Gaza Strip since 2017.