Nat’l Contest for Iraqi Quranic Elites Kicks Off in Najaf

General
News ID: 3464741
TEHRAN (IQNA) – The 10th edition of a national Quran competition for Iraqi Quranic elites got underway in the holy city of Najaf. 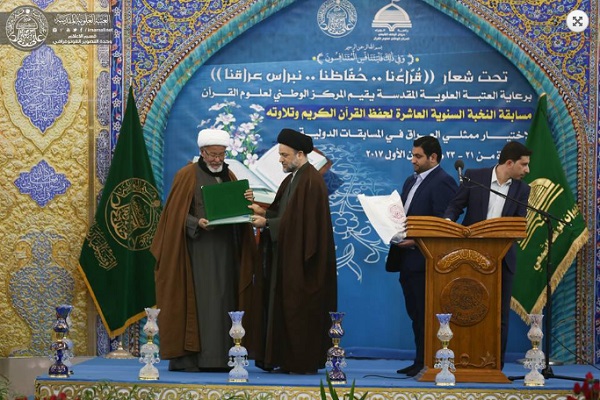 According to Qaaf news agency, the holy shrine of Imam Ali (AS) is hosting the two-day Quranic event.

Organized under the title of “Our Quran Memorizers and Reciters, Glowing Lights of Iraq”, the contest has been attended by Qaris and memorizers of the Astans (custodianships) of the holy shrines from across the country.

It is aimed at selecting the best Quran reciters and memorizers to represent Iraq in international Quranic events.

Noting that it is the final stage of the contest, Fari al-Ameri, director of Iraq’s National Quranic Sciences Center, the organizer of the competition, said 107 Qaris and 27 memorizers took part in the preliminary stage, of whom 16 Qaris and 11 memorizers made it to the final round.

At a ceremony held to launch the final stage of the national Quranic event, Sheikh Jassim Najafi and Sheikh Abdul Noor Humairi, two senior Qaris of Iraq’s Najaf governorate were honored for their efforts to serve the Quran.