General
News ID: 3471861
TEHRAN (IQNA) – Several world countries renewed a call for Israel to halt contentious plans to annex parts of the occupied Palestinian territory after the regime delayed the implementation of the land garb bid in the face of a series of stumbling blocks. 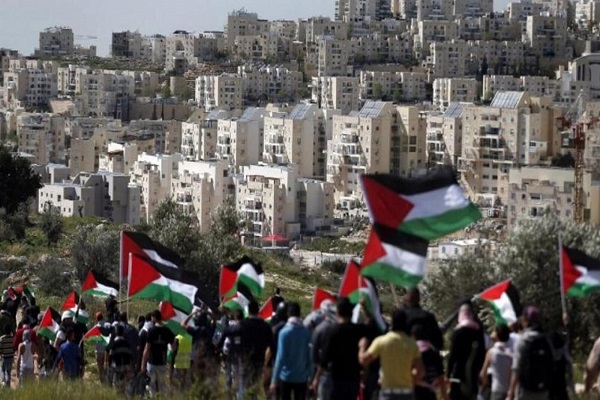 The stumbling blocks include internal rifts, global criticisms and the US’s failure to give Tel Aviv the go-ahead for the move.

Israel's ruling coalition, led by Prime Minister Benjamin Netanyahu, had announced July 1 as the date to begin moving forward with the plan to impose Tel Aviv’s “sovereignty” over about a third of the West Bank, including settlements and the fertile Jordan Valley.

Without clarifications, the regime, however, failed to launch the scheme on the set date amid widening differences between Netanyahu and his coalition partner, minister of military affairs Benny Gantz.

Meanwhile, there are signs that the administration of US President Donald Trump, a staunch Israel supporter, has cooled its backing for the Israeli move amid what is believed to be troubles at home and fears that it might hurt the president’s chances of re-election besides international pressure.

On Wednesday, Netanyahu's office said in a statement that he would continue to discuss a possible West bank annexation with the US administration.

“In the coming days there will be additional discussions,” the statement said.

Labor, Social Affairs and Social Services Minister Ofir Akunis said the Israel would annex portions of the West Bank in July but only after the US president issued a declaration on the matter.

The annexation “will only happen after a declaration by Trump,” he told Israeli Army Radio.

Trump had already given Tel Aviv the green light for the land grab in his self-proclaimed “deal of the century,” which was unveiled in January with the aim of re-drawing the Middle East map.

However, the Trump administration has so far refrained from offering official support for the annexation sought by Netanyahu and his right-wing allies.

Unlike the US, several countries, including some of Israel’s allies, have expressed their opposition to Israel’s planned push to consolidate its occupation of Palestine.

On Wednesday, the German parliament approved a resolution calling on the government to dissuade Israel from annexing the West Bank.

The motion, which was brought in the German legislature by the three parties in Chancellor Angela Merkel's coalition, was approved without opposing votes.

Berlin should use its “special relations and contacts [with Tel Aviv] to express to the Israeli government our concerns and our urgent demand to refrain from an annexation of parts of the West Bank and from the continued expansion of settlements, both of which contradict international law,” read the resolution.

Speaking at the parliamentary debate before the vote, German Foreign Minister Heiko Maas said, “We reject unilateral changes of borders, and we won’t recognize them.”

He also stressed that peace “cannot be achieved through unilateral steps but only through serious negotiations.”

Similarly, French Foreign Minister, Jean-Yves Le Drian warned that any Israeli annexation would be a violation of international law and would bring about consequences.

“Annexation of Palestinian territories, whatever the perimeters, would seriously throw into question the parameters to resolve the conflict,” he told a parliamentary hearing.

The top diplomat added, “An annexation decision could not be left without consequences and we are examining different options at a national level and also in coordination with our main European partners.”

“We are following with concern possible moves towards the unilateral annexation or change in status of territory on the West Bank,” she said in a statement.

“The focus needs to be on a return to direct and genuine negotiations between Israel and the Palestinians for a durable and resilient peace arrangement, as soon as possible,” Payne added.

Meanwhile, the Vatican announced on Wednesday that it had summoned the American and Israeli ambassadors to protest Israel’s annexation bid.

In separate meetings, Vatican Secretary of State Cardinal Pietro Parolin told Israeli Ambassador Oren David and US Ambassador Callista Gingrich of concerns “regarding possible unilateral actions that may further jeopardize the search for peace between Israelis and Palestinians, as well as the delicate situation in the Middle East,”

“As already declared … the Holy See reiterates that ... Israel and the State of Palestine have the right to exist and to live in peace and security, within internationally recognized borders,” the Vatican said in a statement.

“It thus appeals to the parties to do everything possible to reopen the process of direct negotiation, on the basis of the relevant Resolutions of the United Nations,” it added.

Amnesty International called on the international community to take firm action against Israel’s annexation plan and its “law of the jungle” mentality.

“Members of the international community must enforce international law and restate that annexation of any part of the occupied West Bank is null and void,” said Saleh Higazi, deputy regional director for Amnesty Middle East and North Africa.

“They must also work to immediately stop the construction or expansion of illegal Israeli settlements and related infrastructure in the Occupied Palestinian Territories as a first step towards removing Israeli civilians living in such settlements,” he added, according to Press TV.

Also on Wednesday, Palestinians held “Day of Rage” rallies both in the West Bank and the Gaza Strip against the Israeli expansionism.

Some demonstrators carried signs in English reading, “We Can’t Breathe Since 1948” and “Palestinian Lives Matter,” in reference to the American Black Lives Matter movement.

“The occupation has killed us and killed our children and deprived us of a good life. May God grant the Resistance victory,” a protester told the al-Aqsa TV.

“The resistance must be revived,” Gaza protester Rafeeq Inaiah told AFP. “Israel is afraid of force.”