General
News ID: 3472273
TEHRAN (IQNA) – Leading Palestinian factions voiced their strong resentment at an “agreement” reached between Israel and the United Arab Emirates aimed at “full normalization” of their relations. 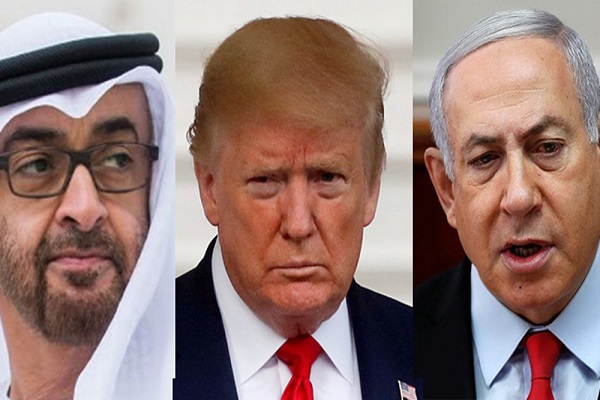 The deal, which US President Donald Trump apparently helped broker, was announced on Thursday.

Trump hailed it as a "huge breakthrough" and a "historic peace agreement between our two great friends," while US Secretary of State Mike Pompeo called it an "enormous" step forward on the "right path." Israel's Prime Minister Benjamin Netanyahu, meanwhile, claimed that the deal marked "a historic day."

Hazem Qassem, spokesman for the resistance group Hamas that has its headquarters in the Israeli-besieged Palestinian territory of the Gaza Strip, however, told AFP the deal "does not serve the Palestinian cause." "The agreement with the UAE is a reward for the Israeli occupation and crimes," Qasem said.

Fawzi Barhoum, another Hamas spokesman, said, "Normalization is a stab in the back of the Palestinian cause and it serves only the Israeli occupation."

The Palestinian Authority (PA) that is based in the Tel Aviv-occupied West Bank voiced its "strong rejection and condemnation" of the deal.

Palestinian President Mahmoud Abbas, who called on the Arab League to address the development in an emergency meeting, referred to the deal as an "aggression" against the Palestinian people and a "betrayal" of their cause.

Abbas said among the things that were being sold out as a result of the normalization deal was the Palestinians’ claim to the holy occupied city of Jerusalem al-Quds as the capital of their future state, Press TV reported.

He was apparently suggesting that by taking Tel Aviv’s side, Abu Dhabi would only be emboldening the occupying regime in its claim to the whole city as its so-called capital.

The Fatah movement, the leading faction within the PA, also said by clinching the agreement, the UAE was flouting its national, religious, and humanitarian duties toward the Palestinian cause.

Netanyahu announced a plan for grabbing a huge swathe of the West Bank, namely the areas upon which the regime has built its illegal settlements since occupying the territory in 1967, as well as the strategic Jordan Valley. He made the announcement after Trump gave him the green light for so doing by unveiling the details of the “deal of the century,” a hugely pro-Tel Aviv scheme.

Observers, however, warned that not only was not the Israeli regime about to stop the plan, but also it was already enforcing it on the ground without declaring it.

Some, though, reminded that the decision by the "unelected" Emirati princes did not serve to represent the standpoint of the millions-strong regional and extra-regional Arab community.