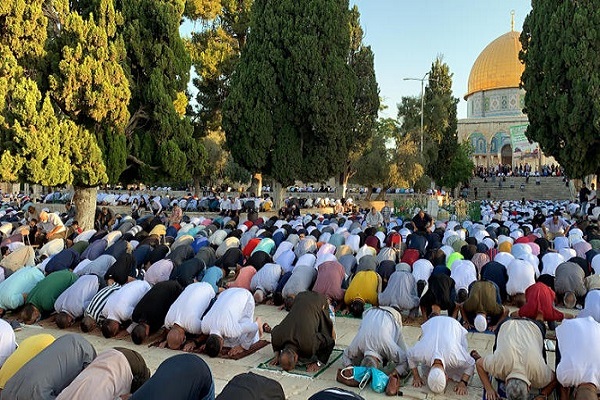 The prayers took place on Tuesday inside the complex in the Old City of Jerusalem al-Quds, where dozens of far-right Israeli settlers broke into on Monday.

Similarly, on Sunday morning, Israeli police officers raided the sacred site before assaulting the Palestinians attending prayers in order to make way for the entrance of hundreds of settlers.

They fired stun grenades and teargas canisters at worshipers to force them out of the holy site, injuring dozens of Palestinians and detaining several others.

The Palestinian Authority said in a statement that it held “the Israeli occupation government fully responsible for the escalation resulting from the Israeli incursion in the al-Aqsa Mosque complex in occupied Jerusalem.”

Hamas warns Israel not to repeat violation of sanctities

Meanwhile, Ismail Haniyeh, the head of Hamas’ political bureau, said that al-Quds is at the center of the Gaza-based resistance movement’s attention, warning the Zionist enemy against repeat of the violation of sanctities.

In a message commemorating the Eida al-Adha, Haniyeh described the occasion as the second feast after the heroic feast of victory in the Operation al-Quds Sword, Press TV reported.

He was referring to the operation launched in May by resistance groups in the Gaza Strip in retaliation for Israel’s acts of aggression against Palestinians in the occupied territories.

The Operation al-Quds Sword was “a turning point” in the history of the conflict with the Israeli enemy and “a political, military and security earthquake” at the heart of the Zionist regime, Haniyeh said.

Through its recent measures in al-Quds and the al-Aqsa Mosque, Tel Aviv is trying to cover up its defeat and undermine the great Palestinian victory, he added.

“The Operation al-Quds Sword emphasized that the battle will not return to what it was before; We are the ones who set the principles, take the initiatives and have the power to determine the time and place of the battle. This victory was recorded in minds and affected all internal and external considerations,” he added.

Haniyeh said one of the outcomes of the battle was the ouster of former premier Benjamin Netanyahu from Israel's political arena.

Additionally, the Islamic Jihad, another Gaza-based resistance group, stressed that the Operation al-Quds Sword has not ended and that the Palestinian nation stands ready to sacrifice and defend the al-Aqsa Mosque and Al-Quds.

Islamic Jihad spokesman Tariq Salmi said, “The enemy’s insistence on allowing entry into the al-Aqsa Mosque in the holy days of Arafah and Dhu al-Hijjah is an act of aggression against all Muslims and an affront to their feelings.”

“These hostile policies, which aim to aggravate the situation, are plain to see. The colonial project of Zionism is the most dangerous component of hostility, and their hostile policies can only be stopped by force,” he added.