General
The link was copied
News ID: 3476044
TEHRAN (IQNA) – In statements on Thursday, Hezbollah and Amal Movement warned against plots to drag Lebanon into a “malicious sedition”, urging the country’s security forces to arrest the culprits behind Thursday’s shooting in Beirut. 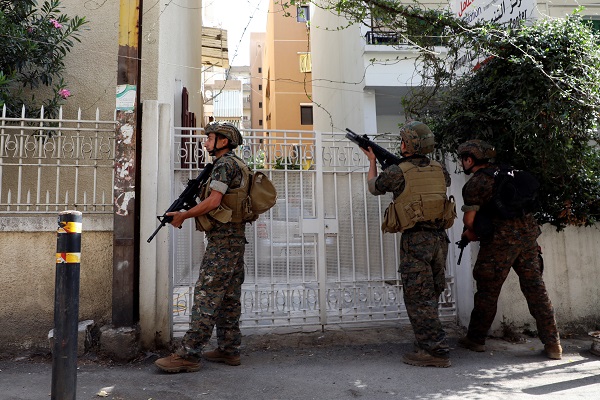 Lebanon's al-Mayadeen television said the gunfire at Tayyoune neighborhood on Thursday targeted hundreds of people, who had gathered in the vicinity of Beirut's Justice Palace.

At least six people have been killed and 60 others injured in Beirut, where armed groups shot from rooftops at Hezbollah supporters, who had gathered to protest against the judge investigating last year's catastrophic port explosion.

In a statement, Hezbollah and its ally Amal said armed groups affiliated with the Lebanese Forces party led by Samir Geagea fired at the protesters from rooftops, aiming at their heads in an attempt to drag Lebanon into a new sectarian strife.

The resistance parties called on the army to intervene quickly and detain the perpetrators. They also called on their supporters to remain calm and “not be drawn to malicious discord.”

The Lebanese Forces is a Maronite Christian based political party and former Israeli-backed militia group during the 1975-90 Civil War.

Lebanon's army said it arrested nine people, including a Syrian. It said on Twitter that it remained deployed in the area to ensure violence did not occur again. The army also urged people to leave the area and warned they would shoot anyone opening fire.

Prime Minister Najib Mikati called an emergency security session as he warned against attempts to drag Lebanon into violence.

Grand Shia Mufti Sheikh Ahmad Qabalan held the US embassy in Beirut and the judge probing the Beirut port explosion accountable for any bloodshed in Lebanon.

“The responsibility for any bloodshed, sedition, threats to domestic peace, and turmoil in Lebanon lies with the US Embassy and Tarek Bitar, who should be removed from the probe and interrogated,” he said in a statement.

He condemned the Tayyoune shooting, describing the consequent security and political fallout as “unfortunate and fairly dangerous.”

Sheikh Qabalan also called on the Lebanese government and judiciary to take immediate action and to prevent the country from being drawn into another violent cycle instigated by Bitar and US agents.

The Supreme Islamic Shia Council of Lebanon demanded harsh punishment for those behind the violence.

The council stressed in a statement that any delay in identification and punishment of the perpetrators would lead to a terrible catastrophe.

It warned of attempts to plunge Lebanon into turmoil, calling for vigilance and restraint in order to nip such bids in the bud.

Former Lebanese president Emile Lahoud pointed to the involvement of the Israeli regime in addition to mercenaries and enemies of the resistance front in the violence.

“Demonstration is everyone's legal right ... Demonstrators have the right to take to the streets and express their opinions. But, it is completely unacceptable for a sniper to target them from rooftops," Lahoud told the Arabic service of Russia’s Sputnik news agency.

He said those dreaming of stoking a civil war in Lebanon will never attain their goal, demanding that the judiciary hold to account those responsible for the latest bloodshed.

“The masterminds of these events are foreign and domestic enemies of the resistance bloc... whatever takes place in Lebanon is chiefly meant to weaken the resistance in some way,” the former Lebanese president said.

Lahoud said mercenaries intend to break up Lebanon, wage a civil war in the country, weaken and finally disintegrate resistance, and serve the Israeli regime’s interests.

The judge has also asked to summon General Security chief Major-General Abbas Ibrahim and State Security head Major-General Tony Saliba. However, the interior ministry and Higher Defense Council did not grant him permission to do so.

More than 200 people were killed and about 6,500 wounded in the explosion at Beirut’s port last year, when a huge stockpile of ammonium nitrate, which had been stored unsafely at the port for years, detonated.

The explosion has left Lebanon’s economy - which is already reeling from multiple crises, including the breakdown of its banking system, spiraling inflation and the coronavirus pandemic - in tatters.

Western meddling and US sanctions have worsened the deteriorating financial and political crisis.