All Can Draw Valuable Lessons from Martyrdom of Gen. Soleimani, Al-Muhandis

General
News ID: 3477214
TEHRAN (IQNA) – The secretary general of Hezbollah said valuable lessons can be drawn from the martyrdom of Lt. General Qassem Soleimani and Abu Mahdi al-Muhandis, who were assassinated in a US drone strike near Baghdad airport two years ago. 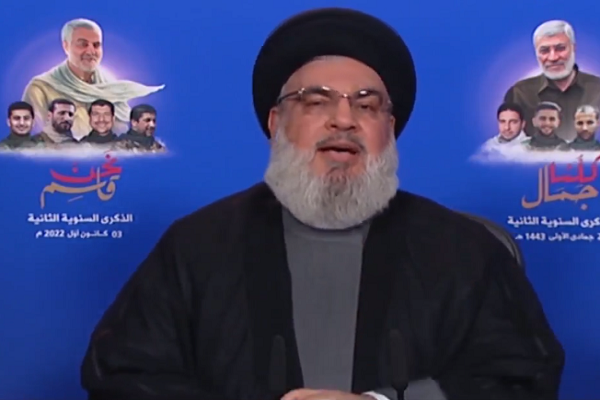 Nasrallah was addressing a ceremony held in Beirut to commemorate the second anniversary of the assassination of Gen. Soleimani, commander of the Quds Force of Iran’s Islamic Revolution Guards Corps (IRGC), his Iraqi trenchmate Abu Mahdi al-Muhandis, the second-in-command of Iraq’s Popular Mobilization Units (PMU), and their companions in a US drone strike authorized by former President Donald Trump near Baghdad International Airport on January 3, 2020.

“The presence of US forces in the region has brought about nothing other than destruction, bloodshed and displacement,” he said, stating that the targeted killings of the two exemplary anti-terror commanders had severe repercussions for the entire Middle East.

He highlighted that Gen. Soleimani and Muhandis made great grounds across the region, adding that all can draw valuable lessons from their martyrdom.

“The United States occupied Iraq for many years, massacred Iraqi people and looted the country’s natural resources. It was Washington that created the Daesh Takfiri terrorist group, and it, therefore, bears complete responsibility for the extremists’ crimes and acts of terror,” Nasrallah said.

While the US ruined Iraq through creation and full support of Daesh (ISIL or ISIS), the Hezbollah chief said, the Islamic Republic of Iran defended the Iraqi nation in the face of the terrorists.

“Given the horrendous crimes it has committed in the country, the US cannot be trusted and viewed as a friend of Iraq,” Nasrallah pointed out.

He said the General Intelligence Presidency (GIP), which is Saudi Arabia’s primary intelligence agency, had for years dispatched bombers to Iraq to carry out terrorist attacks, and the Riyadh regime officially welcomed the advance of Daesh Takfiris and occupation of large swathes of Iraqi territories in June 2014.

“The US and Saudi Arabia played major roles in the massacre of Iraqi people. Iran, on the other hand, had been a staunch defender of the nation,” the Hezbollah leader stressed.

Elsewhere in his remarks, Nasrallah said Palestinian territories have been occupied for decades, lambasting some Arab states for signing normalization agreements with the Tel Aviv regime whilst millions of Palestinians are living under Israel's occupation.

“Washington is responsible for all the crimes that Israel has perpetrated against Palestinians and the Lebanese nation. The US and Israel have killed many Palestinians, while the nation’s supporters, Gen. Soleimani in particular, have sacrificed their lives,” he said.

The Hezbollah chief noted that that the Israeli regime continues to threaten Lebanon and Palestine, saying, “The US cannot be considered a friend of Middle Eastern nations since it actively supports their main enemy, which is Israel.”

“The US destroyed Syria, waged an all-out war on the country, and left Syrians unprotected in order to face slow and gradual death. This is while Gen. Soleimani and Muhandis confronted US' fiendish plots in Syria,” he said.

Nasrallah also described the devastating Saudi-led military aggression against Yemen as a US project, emphasizing that the Riyadh regime is simply playing out Washington’s scenarios in its crisis-hit southern neighbor.

“The United States makes wars in the region in order to plunder our resources. Gen. Soleimani was there to alter equations and defeat enemies,” the Hezbollah secretary general said.

Nasrallah said expulsion of US forces from the region will be the ultimate revenge for the assassination of Gen. Soleimani and Muhandis, underscoring that the Baghdad government and Iraqi nation are fully responsible for the removal of the occupation troops from the Iraqi soil.

“American forces will be finally driven out of the region. The US cannot be viewed as a great example given the substantial level of its domestic problems. The blood of martyred resistance and anti-terror fighters attests to the fact that Washington is the root cause of all problems in our region.

“As long as US forces are present in the region, there will be more occupation, aggression and oppression,” he said.

Nasrallah also denounced Saudi Arabia’s hostile stances against his group, stating that the House of Saud is disseminating the Takfiri terrorist ideology across the Middle East and around the globe.

“Saudi Arabia is taking Lebanon hostage in order to threaten the Beirut government and the Lebanese people. It is fiercely opposed to anyone who has fought or is fighting terrorists in Iraq and Syria,” the Hezbollah leader said.

Nasrallah also underlined the significance of negotiations among all Lebanese political factions in order to overcome existing problems, stating that talks between Hezbollah and the Christian political party Free Patriotic Movement will benefit the entire Lebanon.