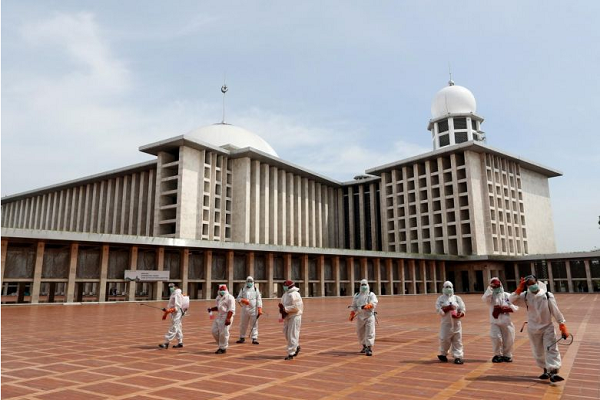 The mosque's management says it is following a decision made by the Indonesian Ulema Council (MUI).

"The mosque's grand imam Nasaruddin Umar has instructed that the Friday mass prayer for this week will be held as usual following the MUI's decision," said the mosque's spokesman, Mr Abu Hurairah Abdul Salam.

However, he added that the decision could be altered if the grand imam and MUI issued new instructions.

The management of Istiqlal will not provide the usual prayer mats. This is to prevent the spread of COVID-19 in the mosque. The authorities have sprayed disinfectant in the building's interior.

Among the places sprayed with disinfectants were "the place for wudhu (ablutions), the bathroom and the Quran mushaf (manuscript) storage area", Mr Abu said.

Istiqlal Mosque, the largest mosque in Southeast Asia, will remain open for Muslims who want to worship. However, they will be asked to leave the mosque after completing their prayers.

Tourists and pilgrims have also been temporarily barred from entering the mosque. This policy has been in place since Monday.

The ulema council previously issued a fatwa allowing Muslims in areas where COVID-19 had spread "uncontrollably" to skip "Friday prayers in those areas until the situation returns to normal". The MUI also urged the government to map areas with outbreaks of the coronavirus following the fatwa.