General
News ID: 3471709
TEHRAN (IQNA) – Rohingya refugees attempting to reach Malaysia by boat from Bangladesh are being held hostage by human traffickers who have demanded large ransoms from their relatives with threats of violence, according to several families and aid organizations. 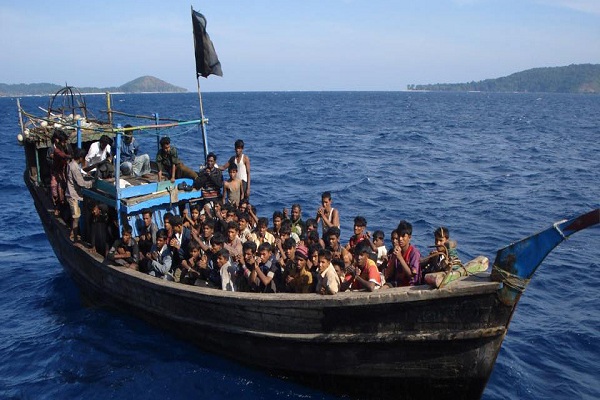 About a dozen Rohingya refugees living in camps in Bangladesh told the Thomson Reuters Foundation they had received phone calls from traffickers demanding money to stop relatives from being abandoned at sea and, in some cases, raped or killed.

More than a million mostly Muslim Rohingya reside in camps in Bangladesh, with the majority having fled a 2017 army-led crackdown in largely Buddhist Myanmar.

With the refugees fearful of returning to Myanmar and frustrated with life in the camps, smugglers and traffickers have capitalized by charging for places on boats to Malaysia - a favored destination for Rohingya seeking better lives.

Long viewed as a smuggling issue, where people willingly pay to cross borders illegally, activists said examples of extortion of the Rohingya were instead a sign of human trafficking which involves individuals being exploited through force or deception.

“I don’t know if she is alive or dead,” said Abdul Hakim, a Rohingya refugee, who last saw his 17-year-old sister in March before she left their camp to take a boat destined for Malaysia.

“A broker called me from the ship a month after she left and asked me to pay 100,000 taka ($1,180) if I wanted her to stay alive and enter Malaysia. We already paid 45,000 taka for the journey through loans. Where will I get so much money?”

None of the 12 families interviewed by Reuters said they had been able to meet the ransom demands.

Hundreds of Rohingya are estimated by aid agencies to be stranded at sea, with Malaysia refusing to accept them after tightening its borders due to coronavirus and Bangladesh saying last week it was not in a “position to take any more Rohingya”.

Last week, Malaysian authorities detained 269 Rohingya when they tried to enter the country on a damaged boat. In April, a trawler that was at sea for weeks after it failed to reach Malaysia returned to Bangladesh with 396 starving Rohingya.

Survivors of recent failed boat crossings have recalled overcrowding, beatings, and people dying of hunger and thirst, and charities fear violence and deaths will increase as traffickers take advantage of the impasse to demand ransoms.

“We interviewed at least 30 family members ... from 14 Rohingya camps who were asked to pay by traffickers if they wanted to see their relatives alive,” said Jishu Barua, anti-trafficking lead for the charity Young Power in Social Action.

“There could be more (examples of ransom demands),” he said.

Police superintendent Iqbal Hossain said he was not aware of such extortion but urged the Rohingya to report any incidences.

“We will definitely take steps to prevent this,” he said by phone from Cox’s Bazar, the region that hosts the refugee camps.

Aid agencies said a growing number of Rohingya in Bangladesh had taken boats headed for Malaysia in recent months due to calm seas and fears over COVID-19 in the camps at Cox’s Bazar, which have recorded at least 35 cases and three deaths since mid-May.

A recent Interpol report said smuggling by sea had tripled from March to April, but did not provide any specific figures.

“The sudden increase was likely due to the fear of COVID-19 contagion in refugee camps fostered by migrant smugglers to boost demand for their services,” the global police body said.

The group said it had documented several cases since April where Rohingya families were pressured to pay ransoms, often more than double the original fee agreed upon for the journey.

The United Nations’ migration agency (IOM) said it had also received reports from Rohingya in the camps about being charged “a fee” to prevent their relatives being stranded at sea. The IOM said it was unclear whether paying the fee had any impact.

The Bangladesh government said it was working to prevent trafficking in the camps, and its coastguard had reported rescuing about 750 Rohingya from traffickers since 2019.

“We have to find the syndicates, this (trafficking) has to be addressed,” said Mahbub Alam Talukder, the country’s refugee commissioner who oversees the camps in Cox’s Bazar.

Mobina, whose 17-year-old son headed for Malaysia more than two months ago, said the teenager wanted to study abroad and was desperate to leave their camp to make something of his life.

“I told him not to go. I told him it would be dangerous,” said Mobina, who did not give her surname for fear of reprisals after traffickers demanded 300,000 taka to keep her son alive.

“Now I don’t know if I will ever see him alive again.”