Book Translated, Published in Hindi on Immunity of Quran from distortion

Culture
News ID: 3476840
TEHRAN (IQNA) – Entitled “Immunity of the Quran from distortion”, the book is a response to new suspicions of deviant people such as Wassim Rizvi in India. 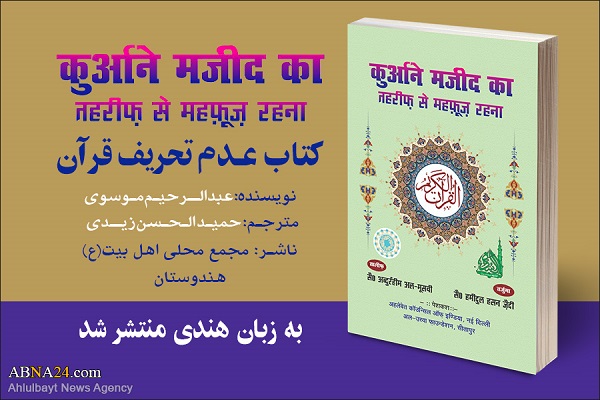 The book “Immunity of the Quran from distortion” by Sayed Abdurrahim Mousawi, is translated by Hamid Al-Hassan Zeydi in Hindi. The book published and distributed in India by the Local office of the AhlulBayt (AS) World Assembly.

The book was published in Hindi following the spreading new suspicions of deviant people such as Wassim Rizvi in India.

Wassim Rizvi, the former head of the Shiite Endowment Office in the Indian state of Uttar Pradesh, recently made some bizarre remarks that led to his rejection by his family and followers of the AhlulBayt (AS) in India. According to him, “26 verses of the Quran that are related to jihad, should be removed from the Quran because they promote violence and terrorism”!

This person, who has no religious education, also claimed, “The Quran that is now available to us has been distorted”!

He asked the Supreme Court of India to remove these verses in the new edition of the Quran, but his request was met with a strong reaction from the Indian Muslim community, as well as a negative response from the Supreme Court.

It is worth mentioning that the AhlulBayt (AS) World Assembly and affiliated local organizations and assemblies have so far published more than 2,000 books on various Islamic topics in more than 55 living languages of the world.