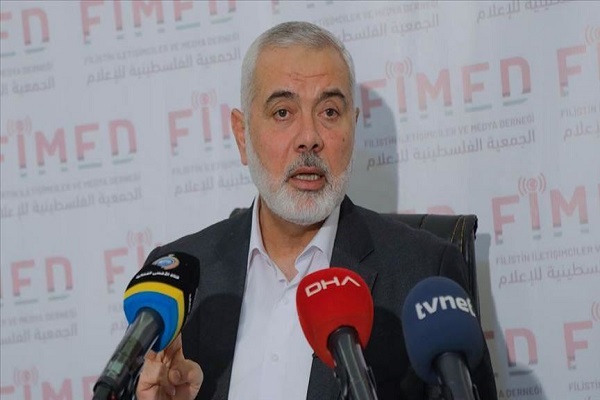 Haniyeh gave a speech in the Palestinian refugee camp of Ein el-Hilweh near the southern Lebanese port city of Sidon, where he received a hero’s welcome by armed men who carried him on their shoulders.

“Our missiles had a range of several kilometers (miles) from the border with Gaza,” Haniyeh said on Sunday, AP reported. “Today the resistance in Gaza has missiles that can hit Tel Aviv and beyond Tel Aviv.”

“We will never forget the right of return (to our homeland) regardless of how much sacrifice it needs (to be realized),” the Hamas leader said.

Haniyeh also said that the normalization process that has begun in the region is not representative of the real position of the regional nations.

“Palestine still has its special place in the conscience of nations.”

Haniyeh and a Hamas delegation met earlier with the Secretary General of the Hezbollah Lebanese resistance movement Sayed Hassan Nasrallah, during which they discussed the situation in the Middle East and the recent normalization of relations between the United Arab Emirates and Israel.