General
The link was copied
News ID: 3475356
TEHRAN (IQNA) – A webinar is planned to be held in South Africa on the role of Hajj and understanding the event of Ghadir in realization of Muslim unity. 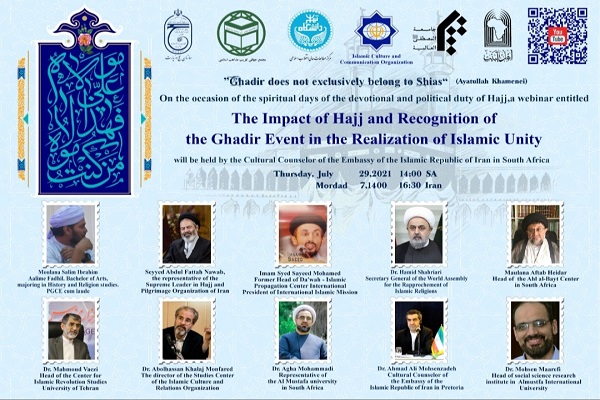 Iran’s Cultural Center in the African country will organize the event on the occasion of Eid al-Ghadir, according to the Islamic Culture and Relations Organization.

It is slated for Thursday, July 29, at 2 PM South Africa time, according to the center.

Iran’s Cultural Attaché Ahmad Ali Mohsenzadeh, President of the Center for Cultural Studies Abol Hassan Khalaj Monfared, Head of Al-Mustafa International University’s Humanities Research Center Mohsen Maarefi and Head of the University of Tehran’s Center for Islamic Revolution Studies, are among those who will address the online forum.

Maarefi in his speech will discuss the fact that the unity of the Islamic Ummah was the Holy Prophet’s (PBUH) main concern during the Hajjatul Wida (Farewell Hajj).