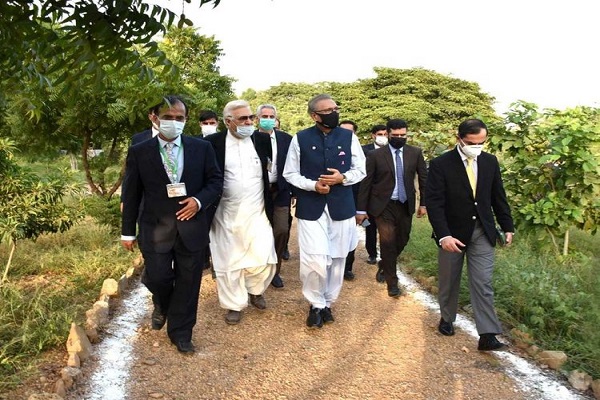 The urban forest is next to Mausoleum of Founder of Pakistan Quaid-e-Azam Mohammed Ali Jinnah.

The fruit garden is another main attraction of the urban forest project having 42 different species of fruit plants that belong to different regions of Pakistan. These include guava, chickoo, sharifa, date, mango, banana, jamun, mulberry, lasura, papaya, pomegranate, falsa, and mulberry.

Shaukat Omeri, President of Community Association for Welfare Services and who is also the man behind the project, said that around 5,000 trees had been planted in the urban forest.

He said that his organisation had the aim to transform the leftover barren area in the surroundings of Quaid-e-Azam’s Mausoleum into the urban green space in the same manner.

President Alvi said that presence of an urban forest next to Quaid-e-Azam’s Mausoleum would serve the purpose of Karachi’s lungs to clean environment of the city and to let its citizens breathe in the fresh air.

The Pakistani president urged the concerned stakeholders including community-based and non-governmental organizations to work together to increase the tree cover in Karachi to effectively combat the issue of environmental pollution.

He highlighted the need to practically involve school students in plantation activities in order to make them responsible citizens for the future who were capable of planting trees and also taking care of them.

Alvi asked the administration of the Jinnah Urban Forest to open the urban green space to the people of Karachi as early as possible to let them enjoy greenery in the midst of city’s hustle and bustle.