General
The link was copied
News ID: 3476226
TEHRAN (IQNA) – The chairman of the political bureau of the Palestinian Hamas resistance movement underlined continuation of resistance against the Zionist regime. 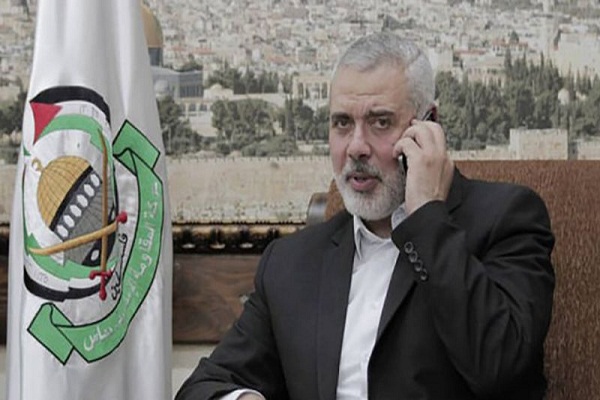 In a telephone conversation with those living in Jerusalem al-Quds’ Sheikh Jarrah Neighborhood, Ismail Haniyeh said just like defending Gazan and other Palestinians in the ‘Operation al-Quds Sword’ back in May, the resistance movement will continue to defend al-Aqsa and Jerusalem al-Quds until their liberation, Al-Ahed News reported.

“You are not alone. All Palestinians are with you. Resistance is with you,” he said.

He underlined that Hamas will not accept any decision by the Zionist regime’s courts involving eviction of Sheikh Jarrah residents.

Haniyeh added that the Zionist regime is an illegal regime in Palestinian land and the annihilation of occupiers is their certain fate.

The Sheikh Jarrah protests in May coincided with a decision by the Israeli regime to ban gatherings in the Muslim holy month of Ramadan at the Damascus Gate of the Old City of al-Quds, and riots by far-right Jewish groups.

The raids prompted Palestinian resistance fighters in the Gaza Strip to respond to Israeli acts of aggression, and fire retaliatory rockets into Israeli-occupied territories.

The Israeli army then launched a devastating 11-day offensive on the besieged Palestinian coastal enclave that killed at least 260 Palestinians, including 66 children.

The name ‘Operation Sword of al-Quds’ was used by the resistance groups based in the Tel Aviv-blockaded Gaza Strip, including Hamas and the Islamic Jihad, to specify their defensive operation against the regime’s latest war on the coastal sliver in May.