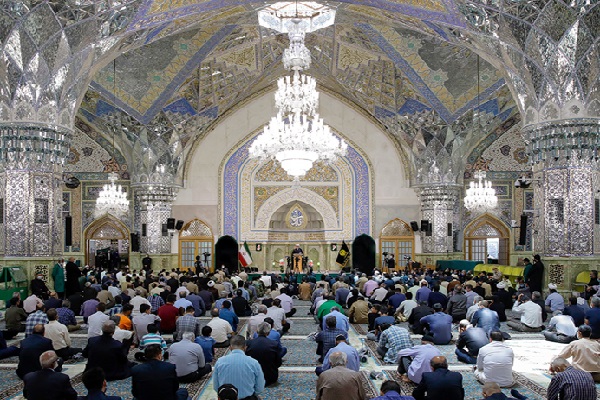 The first night of mourning ceremonies was held by Ayatollah Seddighi’s speech at Imam Khomeini portico of Imam Reza holy shrine accompanying by eulogy recitations of a group of salient Iranian panegyrists.

Introducing Hazrat Zahra (SA) as the first lady in the Islamic world, Ayatollah Seddighi said: “This noble lady played significant role in various scenes and for promotion of Islam; however, the most important issue she defended was Vilayat or Islamic guardianship”.

“After the demise of the Prophet (PBUH), all people of Medina except for a few of the companions of Imam Ali (AS) remained silent before the enemies; Hazrat Zahra (SA) defended Imam of her time bravely and gave her life in this path finally”.

“Today, many countries in the world are standing against the Islamic Republic and Islamic establishment, but the Iranian nation is standing against all enemies by resorting to the practical conduct of Hazrat Zahra (SA),” he added.

Special mourning ceremonies of the day of martyrdom including religious speeches, eulogies and other programs are also underway and they will be continued up to the midnight.

It is worth mentioning that, special programs of Hazrat Zahra’s martyrdom anniversary at Imam Khomeini Portico go live on air thanks to the cooperation between IRIB and Astan Quds Razavi’s Audio-Visual Management Office.