General
News ID: 3477210
TEHRAN (IQNA) – Palestine’s Islamic Jihad movement called for a rally to be held in solidarity with a hunger-striking Palestinian prisoner. 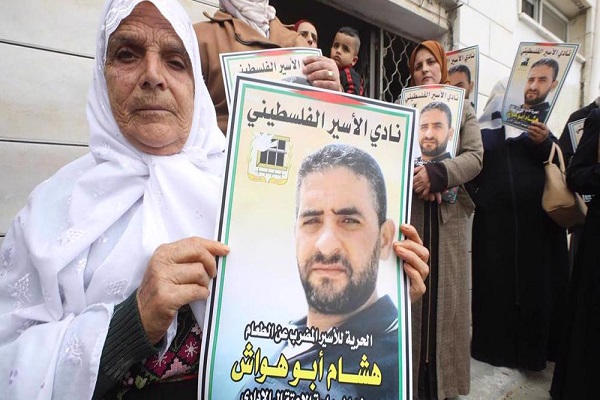 The movement invited all Palestinians to take part in the rally to express support for Hesham Abu Hawash who has been on a hunger strike for 140 days in protest at the Zionist regime’s so-called “administrative detention” policy.

It said the demonstration will be held after Maghrib and Isha prayers in the Gaza Strip today, January 3.

Separately, a member of the Islamic Jihad’s political bureau deplored the Zionist regime’s delay in releasing the prisoner.

Khaled al-Batsh said the occupation regime of Israel is taking revenge on heroes of Palestine.

He added that the way to save Abu Hawash’s life is for Palestinians to take action in all Palestinian lands.

The official Palestinian news agency WAFA reported on Friday that a Health Ministry delegation had visited Abu Hawash. “His health condition is seriously dangerous as he suffers blurry vision, significant muscular atrophy and inability to move and talk,” the delegation said.

Stressing that the worst is expected at any moment as he has entered the 138th consecutive day of his hunger strike, the Health Ministry said its delegation had obtained the medical examinations on the 40-year-old and that they showed a critical shortage of potassium salt and an increase in liver enzymes.

The Health Ministry also said it had reached out to international human rights organizations to demand that Abu Hawash be moved to a Palestinian hospital under these circumstances.