Imam in Wisconsin to Discuss What Quran Says about Bees 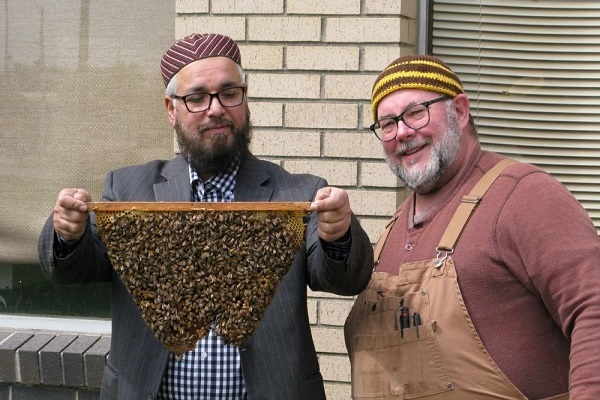 To raise awareness of the importance of bees to our survival, the threats they face and their contribution to sustainable development, the United Nations designated May 20 “World Bee Day.”

Koenen is also executive director and founder of BeeVangelists, a non-profit organization dedicated to advocacy for and education about bees. He also does work for the world’s largest bee distributor, “which happens to be in Sullivan, Wisconsin,” he noted.

Koenen will share “what bees have taught” him over the past two decades. Imam Shafiq will explain what the Quran says about bees and Muslims’ responsibility to these important creatures.

The Networking Brunch, a public event, is open to all. The fee is $10 and registration is required.

When planning the Networking Brunch, “we ask, ‘What do people want to know more about?’ We address whatever is topical and then consider who would be an interesting, dynamic speaker. The speaker is the centerpiece,” explained Cherrie Hanson, MMWC special projects manager.

In February, as families who had escaped Afghanistan relocated to Milwaukee, the Networking Brunch featured Sheila Badwan, lead for Milwaukee’s chapter of Hanan Refugee Services. Hanan and MMWC led efforts to organize donations of essential data-x-items and clothing to newly arrived Afghan families.

The brunch is back in May, after a hiatus during Ramadan, with Wisconsin’s lead beekeeper and bee expert Charlie Koenen and Masjid Al Qur’an’s imam Hafiz Muhammad Shafiq, who has maintained a strong interest in bees for decades. “The month of May, when spring flowers are blossoming and we celebrate International Bee Day, bee education is a hot topic,” Hanson said.

“Our real goal is to bring a variety of people together for a meal. Our strategy is to consider how to get different communities interested,” she said. Hanson sees the focus on bees as a way to interest the Al Qur’an community, especially its youth academy students, as well as others from the Milwaukee community.

Masjid Al Qur’an, 11723 W. Brown Deer Road, Milwaukee, is home to the Al Qur’an Foundation, one of Wisconsin’s oldest Islamic organizations, established in 1992. It owns 8 acres that include beehives, a fruit orchard and a vegetable garden. The hives, orchard and garden were developed to create educational opportunities for Al Qur’an Academy students and the community, said Imam Shafiq.

“MMWC’s Networking Brunch is a community networking brunch that aims to build relationships inside and outside the Muslim community,” Hanson added. “When people come face to face, labels dissolve. We want to bring people together across age, race, gender and ethnicity.