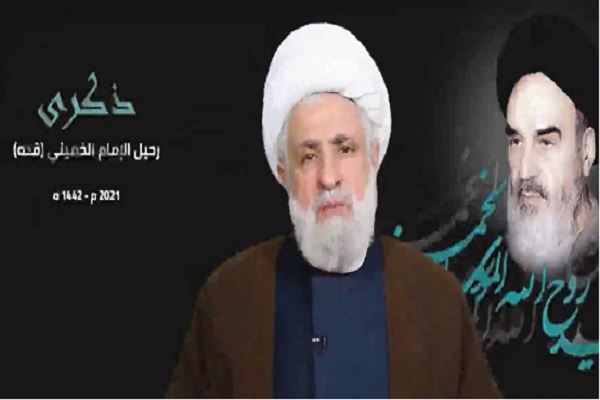 The revival of Islam by Imam Khomeini has been manifested in four areas, Sheikh Naim Qassem said in an address to an international conference titled “Imam Khomeini and the Contemporary World”.

He said the late founder of the Islamic Republic of Iran established an Islamic government based on Islamic Sharia.

The Islamic Republic of Iran has an Islamic constitution and has brought Islam back to the political, economic, social, cultural life and to the ruling system, he stated.

The second one, Sheikh Qassem said, is that Imam Khomeini created an Islamic awakening in the world.

This awakening proved that the true teachings of Islam can fulfil the needs of contemporary humans in all aspects of life, he added.

The Lebanese cleric went on to say that Imam Khomeini also introduced Islam as a religion of wisdom and reason that can counter the ideas of capitalism and communism.

And the fourth one is that Imam Khomeini introduced Islam in a way that can be a religion of resistance and transformation, one that can move realities toward betterment and improvement, he stressed.

Thanks to this, Sheikh Qassem said, Muslims are not afraid of the Zionist regime that has tried to create a new equation in the region and through it dominate the culture, land and future of the regional people.

The “Imam Khomeini and the Contemporary World” international conference was held at the mausoleum of Imam Khomeini south of Tehran on Thursday.

Marking the 32nd demise anniversary of the late founder of the Islamic Republic of Iran, it began at 5 PM local time and concluded at 8 PM.

Speakers at the international forum were also Mostafa Rostami, representative of the Leader of the Islamic Revolution in universities, Abolhassan Navvab, president of the University of University of Religions and Denominations, Saeed Jazari, president of Ahl-ul-Bayt (AS) International University, Shafiq Dayoub, Syria’s Ambassador to Iran, and Nasser Abu Sharif, Palestinian Islamic Jihad Movement’s representative in Iran.

Also, recorded messages from Palestinian Ambassador to Iran Salah al-Zawawi was played at the event.