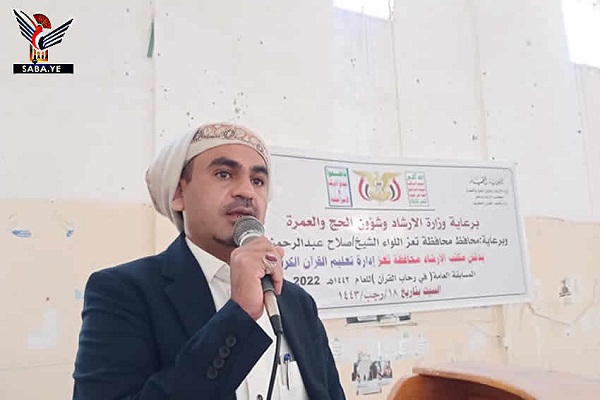 It has been organized by the Yemeni National Salvation Government on the occasion of the lunar Hijri month of Rajab and the anniversary of martyrdom of Sayyed Hussein Badreddin al-Houthi, the founder of the Ansarullah movement, Saba news agency reported.

A total of 275 contestants are competing in two separate sections for men and women.

Addressing the opening ceremony, Salah Bajash, the governor of Taiz, underlined the importance of Quran competitions in promoting the Quranic teachings and raising awareness about them.

He also stressed support for Quran memorizers and efforts to enhance the Quranic culture among the youths.

The official added that sticking to the teachings of the Holy Book is the way to succeed in the soft war through which the enemies try to undermine the values of the society and lead the youth astray.

Also addressing the ceremony was Ismail Ashrafeddin, the deputy governor of Taiz, who said the local officials plan to establish Quran memorization centers and summer Quranic schools in the province.

The National Salvation Government is keen on helping to raise a generation armed with knowledge and science as well as acquaintance with the teachings of the Quran and the Holy Prophet (PBUH), he added.