The link was copied
News ID: 3480020
TEHRAN (IQNA) – One of the most beautiful descriptions of God can be seen in Surah An-Nur of the Holy Quran, about which there are various interpretations. 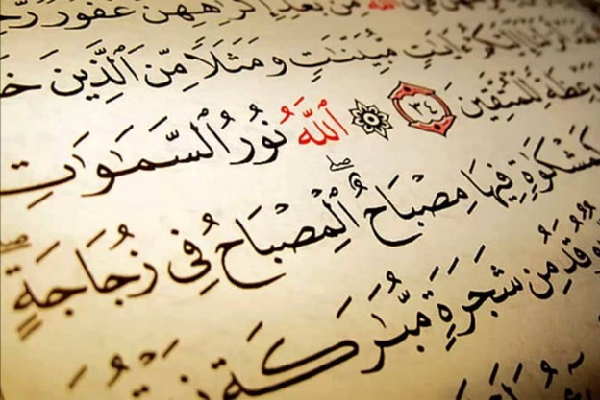 Surah An-Nur is the 24th chapter of the Quran. It is Makki and has 64 verses. It is the 103rd chapter revealed to the Holy Prophet (PBUH).

The Surah is called An-Nur because the word Nur (light) has been repeated in it seven times and it also has a verse known as An-Nur Verse. Many Quran interpreters have referred to this verse, namely verse 35, to come to an understanding of what the Quran says about God because it offers one of the most beautiful descriptions of God:

“Allah is the light of the heavens and the earth; a likeness of His light is as a niche in which is a lamp, the lamp is in a glass, (and) the glass is as it were a brightly shining star, lit from a blessed olive-tree, neither eastern nor western, the oil whereof almost gives light though fire touch it not-- light upon light-- Allah guides to His light whom He pleases, and Allah sets forth parables for men, and Allah is Cognizant of all things.”

The Surah also talks about rules regarding social and family relations. Verses 2 to 8 of the Surah are considered to be among Ayat al-Ahkam (juristic verses).

Citing these verses, some interpreters have concluded that accompanying the leader of the society in resolving problems is a sign of faith and abandoning this is a sign of Nifaq (hypocrisy) or weakness of faith. Among other points deduced from these verses are the prohibition of self-centeredness, especially in issues that require cooperation and consensus, the importance of having a leader in society, the importance of obeying the leader as a sign of faith, and the necessity to respect social order.

The Surah also discusses the relations between men and women, and the issue of fornication and its punishment, as well as rules about Hijab.

Marriage, conditions for marriage and family rules are among other subjects mentioned in Surah An-Nur.

1
LIKE
Error Report
Related News
Purpose of Creation in Surah Adh-Dhariyat
Teachings of Surah Al-Hujurat on Confronting Racism
How to Treat POWs According to Surah Muhammad
Fate of Deniers of God and Day of Judgment as Described in Surah Al-Ahqaf
A Clear Picture of Resurrection Day in Surah Al-Jathiyah
Fate of Deniers of Truth as Mentioned in Surah Ad-Dukhan
Surah Az-Zukhruf Points to A Place Where All Events Are Registered
Surah Ash-Shura; Importance of Consultation
Indistortability of Quran in Surah Fussilat
Prerequisite for Prayers to Be Answered
Quran’s Scientific Miracle in Surah Az-Zumar
Surah Sad: Why Did Satan Disobey God?
Surah As-Saaffat: Those in Line to Confront Deniers of Tawheed
Surah Yasin; Heart and Essence of Quran
Introduction of Trades with No Losses in Surah Fatir
Miracles of Father, Son Prophets in Surah Saba
Surah Al-Ahzab; Quran’s Equal View on Men, Women
Surah As-Sajdah’s Serious Warning to Infidels
Surah Luqman: A Wise Father’s Advice for Son
Quran’s Prediction about Rum and Good Tidings of Helping Believers
Quran Likens Worshipping False Gods to A Spider’s Web
Surah Al-Qasas: God’s Power vs Man’s Wealth and Power
Prophet Sulaiman’s Dialogue with Animals in Surah An-Naml
Logic of Prophets in Surah Ash-Shu’ara
Wonders of Sea in Surah Al-Furqan
Surah Al-Mu’minun: What Are True Believers Like?
Surah Al-Hajj; Warning against Dispute about God
Surah Al-Anbiya; Quran’s Description of True Followers of Faiths
Surah Taha; Lessons on Leadership and Management
Surah Maryam (Mary); Story of A Virtuous Mother
Amazing Stories in Surah Al-Kahf
9 Miracles of Prophet Moses in Surah Al-Isra
Surah An-Nahl: Highlighting Countless Blessings of God
Surah Al-Hijr; Creation of Man and Beginning of Satan’s Enmity
Surah Ibrahim; Emphasis on Common Objectives of Divine Prophets
Surah Ar-Ra’ad, Glorification of God in Skies
Story of Prophet Yusuf (AS) Most Beautiful Story in Quran
A Surah of Quran That Made Holy Prophet Grow Old
Surah Yunus: Challenges for Deniers
At-Tawbah; Only Surah That Begins without Name of God
Surah Al-Anfal; Explaining Real Meaning of Jihad in Islam
Surah Al-An'am; A Comprehensive Declaration on Islamic Sharia, Belief
Creation of Man among Main Topics Mentioned in Surah Al-A’raf
Miracles of Jesus in Surah Al-Ma'idah
Surah An-Nisa; A Quranic Chapter for Women
Quick Look at Resistance of Prophets against Enemies in Al Imran Surah
When Unbelievers Turn to God
7 Key Points of Longest Chapter of Quran
Tags: Holy Quran ، Surahs of Quran ، 114 ، Surah An-Nur ، family relations ، Quranic Concepts
Your Comment