Bain-ul-Haramain in Karbala Prepared to Host Pilgrims in Winter

General
The link was copied
News ID: 3481166
TEHRAN (IQNA) – The Bain-ul-Haramain in the holy city of Karbala has been prepared for hosting pilgrims during the wintertime. 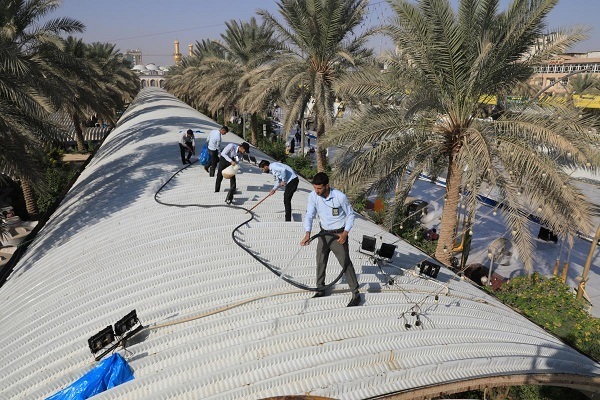 The Bain-ul-Haramain is an area between the holy shrines of Imam Hussein (AS) and Hazrat Abbas (AS) in the Iraqi city.

The Bain-ul-Haramain deputy of the Astan (custodianship) of Hazrat Abbas (AS) holy shrine took measures, which include repairing and clearing wastewater pipelines and rain water drainage canals in the area.

After the conclusion of the work on drainage systems in the roofed area of Bain-ul-Haramain, the staff and servants of the Astan carpeted the area.

They also washes and cleaned the dome of the holy mausoleum of Hazrat Abbas (AS).

The sacred mausoleums of Imam Hussein (AS) and Hazrat Abbas (AS) host a large number of pilgrims all around the year.

They attract millions of pilgrims from across Iraq and abroad annually.