General
The link was copied
News ID: 3482206
TEHRAN (IQNA) – The fifth Islamic Revolution Quranic convoy will start its programs in a few days to mark the anniversary of the victory of Iran’s Islamic Revolution. 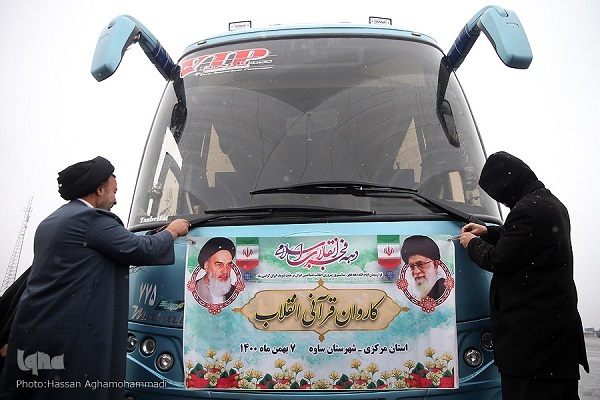 According to the head of the Quran and Nahj al-Balagha committee of the headquarters for celebrating the occasion, some 9,000 Quranic circles and recitation programs will be organized by the convoy.

Hojat-ol-Islam Ali Taqizadeh made the remark in a press conference in Tehran on Tuesday, noting that like previous years, the convoy of Iranian Quranic figures and activists travel to different cities of the country to hold Quranic programs.

He said the Islamic Revolution was formed and developed based on Quranic concepts and therefore the Iranian Quranic community considers it a responsibility to safeguard the revolution.

The cleric noted that members of the Quranic community will visit the mausoleum of Imam Khomeini (RA) in Rey, south of Tehran, on Wednesday to renew allegiance with the aspirations of the late founder of the Islamic Republic.

Then the Quranic convoy will start traveling to different cities in provinces like Gilan, Mazandaran, Golestan, North Khorasan and Razavi Khorasan, to hold Quranic programs, he added.

Hojat-ol-Islam Taqizadeh said the Quranic events will be broadcast live by the Quran TV.

Another program that the committee will organize on the occasion is a series of exhibitions that will be mounted in all provinces of the country under the title of “Quran, Imam and Islamic Ummah”, he stated.

Qaris will also be dispatched to different countries to take part in the programs planned on the occasion, he went on to say.

The day of Imam Khomeini’s return to Iran (February 1 this year) marks the beginning of the Ten Day Fajr (Ten Days of Dawn), which culminates with rallies on the anniversary of the victory of the Islamic Revolution on February 11.

The Iranian nation toppled the US-backed Pahlavi regime 44 years ago, ending the 2,500 years of monarchic rule in the country.